Shot in the last years of military dictatorship, Theo Angelopoulous’ The Travelling Playerspresents history as a series of labyrinths, a kind of endless maze with no visible barriers, just open space, as the troupe of actors wander through the snow, through ruined forts, by the endless sea—Thalassa—journeys of departure and return, the narrative framing by which he justified the filming when questioned—members of the troupe play out the Agamemnon myth—seeing mythic structures bespeak political crises, the agonised emergence and suppression of new modes of representation, betrayal and complicity, resistance and torture, all in long shot, at arm’s length, the distance of time disappearing or moving too fast, history experienced by those who walk through its middle, at its edge. The camera pans and it’s 1939, pans again and it’s 1945, and again it’s 1952: the Communists shot in the square; the Communists who return to the square; red flags against the sky; the corner of a courtyard, the edge of a street, the dates bracketing differing forms of dictatorship, its national flags and chants, its bands of fighters for justice and its bands of fighters for the forces of repression. That empty corner remains as space of contemplation, shelter, refuge, and abysall emptiness, the void of defeat, the screams and shots coming from outside the field of vision, sound seeping through. This is a film in which the sound—all diegetic—enacts the field of conflict: monarchists and Communists sing competing songs to the same adapted tune before the monarchists pull out their guns; the head of the troupe who will later betray his colleague to the Fascists sings a Monarchist song to which his colleagues pointedly do not join; the accordion player plays whenever asks, when forced to stage a performance by a group of British troops, at the funeral of a murdered Communist, at the beginning of the never-completed bucolic farce they stage in their travelling show. Silence bespeaks the beginning of another song, another conflict, whether signalling a fresh hell or a fresh hope—a whistled Internationale; the imposition of American popular song by occupying soldiers—interlude, punctuation, space of contemplation, silence and empty space, as the camera pans, silence as holding place of trauma, holding place of possibility, placeholder, holding on. 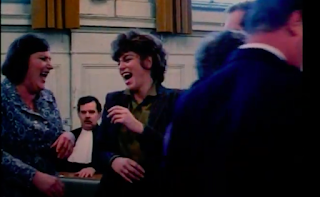 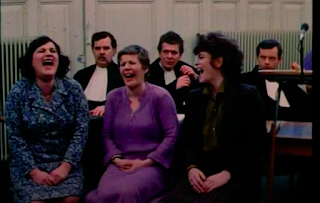 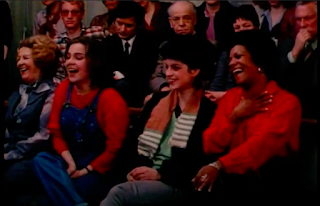 In Marleen Gorris’ A Question of Silence (1982), three women—‘ordinary women’, as the court-appointed psychiatrist deems them—murder the proprietor of a clothing boutique with whatever’s to hand—broken coat-hangers, clothes display racks, their hands, their feet, his body mutilated beyond recognition. The psychiatrist (Cox Habbema), a middle-class woman who’s ‘made it’ in a world of supposed gender parity, of liberal policy, where even the Netherlands' prisons appear modestly liveable, tries to frame, to ‘understand’ the ‘ordinary women’s’ refusal to either apologise, justify or divulge the motivations for the act: the single woman who talks too much to fill the silence of sexism, of abandonment, of clinging to a shitty waitressing job because it’s all she can get; the secretary whose ideas are stolen in board meetings, relentlessly talked down to, her mother seeking to marry her off; the housewife in patriarchal containment, surrounded by the voices of children, the demands of a husband, her wishes and desires ignored, having already taken a kind of vow silence, barely speaking, sitting, smoking. When the psychiatrist challenges the male prosecutor who expects her to put in a plea of insanity—these women knew what they were doing and are not insane, she insists—trying to force her to insist that it would make no difference if they were men murdering a female shopkeeper or women murdering a female shopkeeper, the women in the stand burst into uncontainable laughter. In the audience, other women, silent witnesses in the boutique who never came forward, who maintain a conspiracy of silence-as-solidarity, laugh too; the prosecutor joins in: laughter as noise in the face of the discourse and logic of male order, law, psychiatry, rationality, the ‘reasonable’ conformity of gender oppression, silence as a militant silence rather than the oppressed silence it was before. In ‘Human Personality’, Simone Weil talks of the magistrate stammering before the court."Nothing, for example, is more frightful than to see some poor wretch in the police court stammering before a magistrate who keeps up an elegant flow of witticisms." One form of silencing, of broken and foreclosed speech. But silence in the courtroom might also be a mode of resistance. In her essay on Gorris’ film, ‘Silence/Laughter’, Amelia Groom links such silence to an example from history that’s also inscribed into the heart of cinema, via Carl Dreyer’s iconic 1928 (silent) film: at her trial, Joan of Arc, faced by remorseless questioning, said she couldn’t remember, refusing to divulge, refusing to be understood. If Angelopoulous’ silence bespeaks the absence of communal bonds—destroyed by torture, execution, murder, forced confessions, forced compromises for the sake of peace after years of dictatorship, occupation, and civil war, personal and collective loss and defeat, the rest is silence, Gorris’ silence opens up a space—the absence of comprehension of the apparently incomprehensible act that brings these women together in a temporary, shared space they’d otherwise occupy only as separated strangers sounding out both as the horrified realisation of the logical costs of the society that took them there and of another kind of possibility; slaughter, laughter, silence, continuance.
Posted by david_grundy at 6/20/2021 01:16:00 pm