Sonny Simmons in the UK

Haven't been posting on this blog as much as I'd like to recently: been busy with the workload of a university term, and my attempt to start a jazz magazine, which take up a lot of my writing energies!

However, here's a short video I made from footage I shot earlier this evening, at a rare UK gig by Sonny Simmons, playing with the Tight Meat group. Billed as a collaboration between the old and the new, and described on the programme as "punk-primitive post-noise" (whatever that means! not a lot, I suspect), what it boils down to is very loud, very intense free jazz. A bit one-track, very unsubtle, not allowing Simmons' more lyrical side to come through - all valid criticisms, but, for sheer visceral impact, there's not much that beats standing in a room having your ears blasted from your skull by the sound of howling, roaring saxophones and plucking, grinding, booming bass and drums.

In the meantime, check out my new site, on which I'm going to be posting new and archived MP3s of my shows on Cambridge Student Radio. This term, there have been programmes on subjects diverse as Archie Shepp, the meeting of Jazz and Classical music, and a brief history of electronic music.

Donald Ayler has passed away. 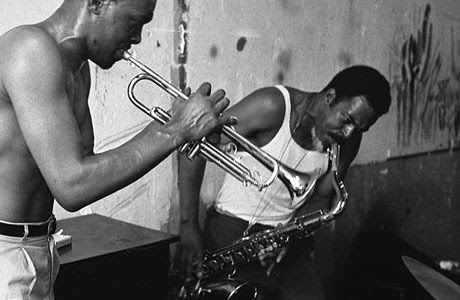 He died of a heart attack on 24th October.

Best known for his appearances with brother Albert on some of his classic 1960s free jazz albums, he was fired from the band after an alcohol-related(?) breakdown; the emotional effects of this may in turn have contributed to Albert's suicide. He went on to record one album as a leader, a 3-LP set called 'In Florence', in 1981, and also did a session for Amiri Baraka's Jihad Label, which was never released.

His technique was never prodigious (reminiscent perhaps of Ornette Coleman's attempts at trumpet playing, at times), but he made an important colouristic contribution to Albert's work, and his mixture of a strange Spanish tone with blistering free-form freakout was oddly compelling.

By no means a major voice, but he was there, actively participating, when some of the great, unsurpassed music of the twentieth century was being created, and that's more than many can say.

You can find a description of his funeral here: http://www.ayler.org/albert/html/what_s_new.html
More details about the 1981 recording under his leadership here:
http://www.ayler.org/albert/html/donayler.html
A blog post which includes an MP3, 'The Bebop Tune', from that 3-LP set:
http://justforaday.blogspot.com/2006/02/ghosts-alive.html
And a message board thread touching on, among other issues, his breakdown and how it relates to Albert's death:
http://www.organissimo.org/forum/index.php?showtopic=36919&st=15&start=15

Remco Takken, in a review of Albert's 'Bells': "What the critics missed, was what Albert’s brother, Donald, was contributing to that record. Although it wasn’t the debut of trumpeter Donald Ayler- he made his first appearance on disc with Albert on The New Wave in Jazz earlier that year- Bells shows for the first time what Donald was capable of in terms of humoristic and spiritual musical communication.

Albert wanted a trumpet player in his expanding group. So by the end of 1964 Donald took up the trumpet studying nine hours a day for a few months. While being able to follow the breathtakingly sharp improvisations of his brother almost immediately, he never perfected the technique of his trumpetplaying than up to the degree that he needed to accompany Albert’s saxophone.

Donald contributed enthusiastic arranging in turn-of-the-century style, and a Louis Armstrong-era swing to Albert’s writing. The sixties statement that free jazz was in a way a recuperation of early Dixieland music, with all musicians soloing at the same time, is commonly associated with Ornette Coleman’s music. But the music of the Aylers is far more directly connected with New Orleans style jazz than Ornette’s abstract art music. What the Ayler brothers added to furious free soloing, were recognisable hymns and songs. True, those lovely little tunes were set up mainly to be completely deconstructed, and sometimes virtually raped…"

And has anyone else noticed the way that these guys have been forgotten?

...has anyone noticed the way the Burmese crisis just slipped out of the news once the censorship kicked in and no images could get out? Oh well, at least there's Pakistan now - some juicy images for people to look at so that they have something to focus their attention on. And the news teams can get some proper product-shifting in. (Since when has news become a product? And why?)

But just because it's slipped out of the mainstream headlines, and just because hte politicians aren't that bothered (well, I mean, can you imagine that the Americans care that much? I don't see the words "oil" and "Burma" banded around together much, do you?) - just because of this, doesn't mean we should just forget about it. In fact, it makes it doubly important that we keep updated - one way of doing so is this wikipedia entry on the crisis: http://en.wikipedia.org/wiki/2007_Burmese_anti-government_protests

Oppression is just a fact of life for much of the world, or so it seems. But that does't mean we should accept it, or be complacent in its face.