There's a Trumpet in My Soul

Thought I'd put some music up today - this is an LP rip of Archie Shepp's 1976 album 'There's a Trumpet in My Soul', released on Freedom Records. In terms of accessibility, it falls somewhere between the more mainstream approach of 'Attica Blues' and 'The Cry of My People' and the avant-garde experimentaiton of 'New Thing at Newport' or 'Live at Antibes'. It's not a perfect record (what is?), but is definitely worth a listen. (I've posted a more detailed review below).

And if you want to buy Archie Shepp music, go here:
http://www.archieshepp.com/cdorders.html 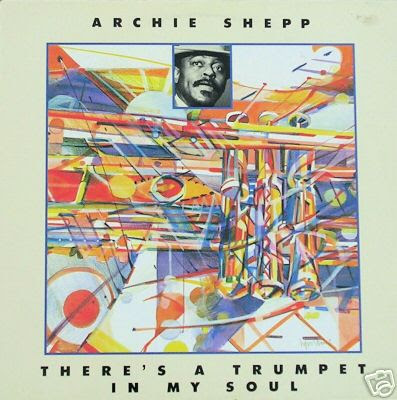 ARCHIE SHEPP: THERE’S A TRUMPET IN MY SOUL
Freedom Records, 1976

One of Coltrane’s foremost disciples, and a leading force in the ‘new wave’ of 1960s and 70s Free Jazz, Shepp always had his foot firmly in the traditional camp as well (for example, his duets with Horace Parlan). In fact, I’ve read him described as “a wolf in sheep’s clothing”, and, in his older years, he has started to sound more and more like Ben Webster. There’s a good balance of his lyrical and exploratory sides here. The record opens with a ‘suite’: first, the title track, sung with breathtaking purity by Semenya McCord, who is at first accompanied by just acoustic guitar; Shepp then comes in for the brief, and utterly wonderful, Samba da Rua (which shows just how good his lyrical playing can be), before Zaid, Part 1, ups the heat a notch. Driven on by a propulsive piano riff, Shepp is given ample opportunity to stretch out on tenor, before a trombone solo fades out and something weird happens. Shepp had previously done an ironic (and not entirely successful) cover of Jobim’s ‘Girl from Ipanema’ on ‘Fire Music’, but here, he offers up a seemingly straight bossa-nova/popish song on which he plays soprano saxophone (with a light, creamy tone), and Bill Willingham offers some smooth and effortless vocals. It’s hard to know what to make of this (hardly the sort of thing you expect from one of the leaders of the avant-garde) but it’s very pleasant listening, and it works a treat (better than much of the original bossa nova!).

The second half of the ‘There’s a trumpet in my soul’ suite picks up Zaid again, runs with it for fourteen minutes, segues into a poem, declaimed with appropriately stern seriousness by Bill Hasson (‘It is the year of the rabbit…’), and then ends with a final smattering of Zaid. Shepp’s playing is certainly ferocious on the driving group textures of Zaid (divided into three parts to split up the intensity, which certainly accounts for an easier listening experience, though whether or not it’s a more rewarding one is debatable), and he has some fine support. The texture can sometimes get a bit muddy (not sure how good an idea it was to have both the acoustic and electric pianos playing together). All in all, though, it’s fine stuff; in fact, it might be a good place to start for the uninitiated.
Posted by david_grundy at 2/10/2007 02:43:00 pm 2 comments: