Today is March 12th, Jack Kerouac's birthday, so I've got an excuse to post a long list of Beat generation quotes...

"angelheaded hipsters burning for the ancient heavenly connection to the starry dynamo in the machinery of night..."

"In this modern jazz, they heard something rebel and nameless that spoke for them, and their lives knew a gospel for the first time. It was more than a music; it became an attitude toward life, a way of walking, a language and a costume; and these introverted kids... now felt somewhere at last," while Jakc Kerouac said, "I want to be considered a jazz poet blowing a long blues in an afternoon jam session on Sunday."

"[this was the] ebullient, adrenaline-laced music that Kerouac and his generation of beats, intellectuals and drop-outs lived, loved and passed out to in those intoxicating post-war years when it seemed that mesisahs really could emerge from the dark recesses of night clubs and blow everyone away with their messages, and that Young America would be out there, listening to every diamond-hard note."
- Keith Shadwick, writing with a touch of Keroucian flair, in the liner notes to the recent CD 'Jazz of the Beat Generation', which mixes recordings from the time by the likes of Monk with Kerouac reading excerpts of his work.

From Kerouac's 'Belief and Technique for Modern Prose, a list of thirty "essentials." '

1. Scribbled secret notebooks, and wild typewritten pages, for yr own joy
2. Submissive to everything, open, listening
3. Try never get drunk outside your own house
4. Be in love with your life
5. Something that you feel will find its own form
6. Be crazy dumbsaint of the mind
7. Blow as deep as you want to blow
8. Write what you want bottomless from bottom of the mind
9. The unspeakable visions of the individual
10. No time for poetry but exactly what is
11. Visionary tics shivering in the chest
12. In tranced fixation dreaming upon object before you
13. Remove literary, grammatical and syntactical inhibition
14. Like Proust be an old teahead of time
15. Telling the true story of the world in interior monolog
16. The jewel center of interest is the eye within the eye
17. Write in recollection and amazement for yrself
18. Work from pithy middle eye out, swimming in language sea
19. Accept loss forever
20. Believe in the holy contour of life
21. Struggle to sketch the flow that already exists intact in mind
22. Don't think of words when you stop but to see picture better
23. Keep track of every day the date emblazoned in yr morning
24. No fear or shame in the dignity of yr experience, language & knowledge
25. Write for the world to read and see yr exact pictures of it
26. Bookmovie is the movie in words, the visual American form
27. In praise of Character in the Bleak inhuman Loneliness
28. Composing wild, undisciplined, pure, coming in from under, crazier the better
29. You're a Genius all the time
30. Writer-Director of Earthly movies Sponsored & Angeled in Heaven "

From 'On the Road':
"Dean and I went to see Shearing at Birdland in the midst of the long, mad weekend. The place was deserted, we were the first customers, ten o'clock. Shearing came out, blind, led by the hand to his keyboard. He was a distinguished-looking Englishman with a stiff white collar, slightly beefy, blond, with a delicate English-summer's-night air about him that came out in the first rippling sweet number he played as the bass-player leaned to him reverently and thrummed the beat. The drummer, Denzil Best, sat motionless except for his wrists snapping the brushes. And Shearing began to rock; a smile broke over his ecstatic face; he began to rock in the piano seat, back and forth, slowly at first, then the beat went up, and he began rocking fast, his left foot jumped up with every beat, his neck began to rock crookedly, he brought his face down to the keys, he pushed his hair back, his combed hair dissolved, he began to sweat.

The music picked up. The bass-player hunched over and socked it in, faster and faster, it seemed faster and faster, that's all. Shearing began to play his chords; they rolled out of the piano in great rich showers, you'd think the man wouldn't have time to line them up. They rolled and rolled like the sea.

Folks yelled for him to "Go!" Dean was sweating; the sweat poured down his collar. "There he is! That's him! Old God! Old God Shearing! Yes! Yes! Yes!" And Shearing was conscious of the madman behind him, he could hear every one of Dean's gasps and imprecations, he could sense it though he couldn't see. "That's right!" Dean said. "Yes!" Shearing smiled, he rocked. Shearing rose from the piano, dripping with sweat; these were his great 1949 days before he became cool and commercial. When he was gone Dean pointed to the empty piano seat. "God's empty chair," he said. On the piano a horn sat; its golden shadow made a strange reflection along the desert caravan painted on the wall behind the drums.

God was gone; it was the silence of his departure. It was a rainy night. It was the myth of the rainy night. Dean was popeyed with awe. This madness would lead nowhere."

Wayne Shorter and the Magic of Sound 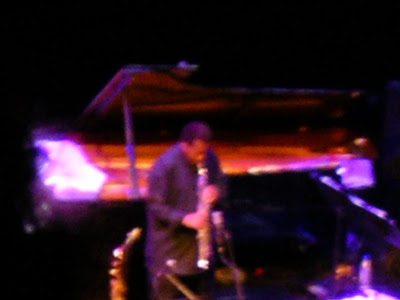 It's taken me a while to put this up, but finally, here’s a post on the gig the Wayne Shorter Quartet played at the London Jazz Festival back in November 2006. These are my unedited thoughts, written on the train on the way back from the concert. They might ramble a bit, but they capture some sense of the excitement I felt after a truly awe-inspiring experience.

The Stan Tracey trio's performance in the first half of the concert was good - crisp, spiky, hard driving, with moments of ruminative meditation - immensely satisfying straightahead jazz. Tracey has a unique voice; even if you can hear Ellington and Monk in a lot of what does, the overall effect is very different. We should take advantage of the fact that he's still gigging, and still playing superb music - there aren't many musicians like him.

But the Shorter was monumental - after the stiff, arranged fusion of the 80s like 'Atlantis', he's now producing some of the most innovative and captivating music of his career. He revealed himself as a truly unique artist - idiosyncratic, and maybe not to everyone's tastes, but utterly compelling nonetheless. The music ranged from the most dramatic of climaxes to priceless, quirky little moments, such as when Shorter whistled into his microphone and casually strummed his fingers over the piano strings during a Danilo Perez solo, or when he was poised to come back on, and stepped forward, only to step back again with a wry grin to John Pattituci when Perez launched another grandiose block of chords. This was music that breathed the spirit of jazz; full of freedom and spontaneity, it was an organic, flowing, natural, living, flowing thing, not the dull, repetitive and clichéd stodge the genre can so easily become.

The main thing that gives this impression is form - the quartet produce a really refreshing escape from the usual theme/solos/theme straitjacket (although this doesn't have to be restrictive if the musicians are good enough to transcend its limitations, even to work with them, like Tracey does). I guess you might describe it with the once fashionable term 'jazz suite' - Shorter doesn't perform pieces/tunes in the conventional sense, but great slabs of music in half-hour chunks. That's not to imply that there were no melodies- familiar tunes like 'Sanctuary', ‘Footprints', 'Over Shadow Hill Way' and 'She moves through the Fair' were all present- but these just flowed in, like jewels floating in a sea of improvisational ideas.

The music moved through emotional logic, rather than pre-arranged structures, it seemed, building to awesome peaks of intensity, with thundering drums, majestic piano and, often, Shorter screaming to the heavens on soprano sax, the instrument he increasingly favoured as the concert went on, then subsiding to a hushed lyricism (with Perez' classically-tinged, Romantic piano solos a particular highlight), or to the sort of scurrying, insect-like intensity that for me most characterizes the group, with Shorter playing gnomic lines, playfully exchanging and picking up ideas with Perez, while Pattituci and Blade create an ever-changing, buzzing backdrop. 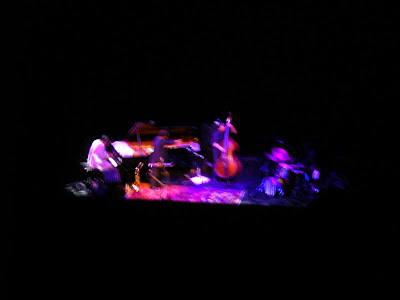 Shorter seemed unsure at first, as if he was feeling his way in - you could sense the audience collectively hold their breath as they waited to see if the living legend would produce his magic. But as the quartet clicked (their interplay is practically telepathic, recalling one of Shorter’s old groups, the Miles Davis quintet – like Miles, he makes liberal use of hand signals to control the flow of the music), he began to play more and more, blowing for all he was worth, but not grand-standing (this is such a collective unit that it's often hard to distinguish clearly who's taking a solo, because it doesn't work like that – though I'm by no means suggesting that it's messy or cluttered in any way). By the end, he was consistently playing spine-tingling shrieks that filled the hall - his soprano paying may have been somewhat eccentric over the years, but tonight it felt electrically-charged. This was all about spontaneity - demonstrated best when Shorter picked up the tenor sax, then put it down after a moment's thought, waited a few seconds, then picked up the soprano and played some of his best of the evening.

At the end of each long piece, it was as if the audience had undergone a cathartic experience, and the release of energy in thunderous applause was infectious. They wouldn't let Shorter go either - the band left the stage, but were ushered back by the applause to give another 10 minutes that was just as good as what had gone before. It may be that the live experience leads one to over-enthusiasm, but this really did feel like history in the making - more natural and flowing even than his last live album, 'Beyond the Sound Barrier' (which was perhaps compromised by editing down some of the tracks), it felt innovative in a way that I can’t recall since another group with Shorter in it, Miles' Davis 'lost quintet' of 1969/70. The ethos of the evening was best expressed when the band members linked arms onstage and bowed, hugging like brothers, epitomizing their telepathic mutual understanding and interplay, their willingness to take risks, their seemingly endless capacity for invention, and ability to surprise - jazz not just as great music, but as symbolizing freedom and brotherhood, human beings with the desire to create afresh and the means to do so. As Shorter’s supposed to have said, “to hell with the rules. I’m going for the unknown.” He certainly did that tonight. 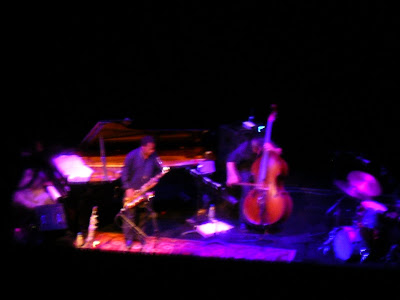 This concert was broadcast unedited (apart from a brief 1½ minute ‘interlude’)) on Radio 3 a few months back, but, as far as I know, there are no plans to released it as an album, which is a great shame. So, though I’m not sure about the copyright of this, if anyone wants me to put up any MP3s or other such downloads of the whole, or part, of the gig, I’ll oblige in due course.
Posted by david_grundy at 3/03/2007 12:43:00 am 1 comment: