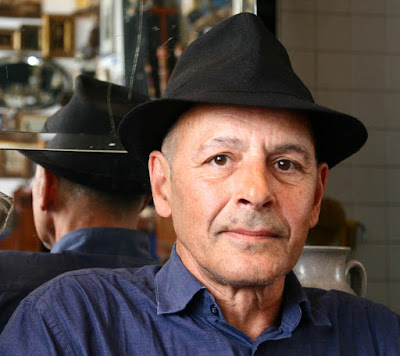 Once more the new year sees the passing of some of the fundamental musicians of the margins. I wrote a fairly lengthy article about the extraordinary singer Ghédalia Tazartès back in 2009, when there wasn't much attention being paid to his music outside the world of music-sharing blogs, Tazartès on the cusp of a the flurry of activity, including collaborations including the groups Reines d'Angleterre, with David Fenech and Jac Berrocal, and reasonably frequent live performances. While there's much that's cringey or inaccurate about the writing, I'd still stand by some of its characterisations of his music. I'd add that 'singer' doesn't really capture the scope of his artistry: the music's focus is on his powerfully flexible, emotive voice, but the role of a kind of cracked analogue technology, of recordings spliced, looped, cut-off mid-phrase, incorporating the sounds of life all around them, is equally vital to their loosely authoritative architecture. Dialogues, shadows, doubles, music that's made out of the valued detritus of life, Tazartès' apartment by all accounts shaped like his music, a Simon Rodia-esqueassemblage spilling over at the edges, a magpie-like imagined folk music beyond the bounds of nation or people but with all the grit and attention to detail of a music made from the bottom. "Ferme ta gueule, Zarathustra!", as one of his pieces so memorably puts it. 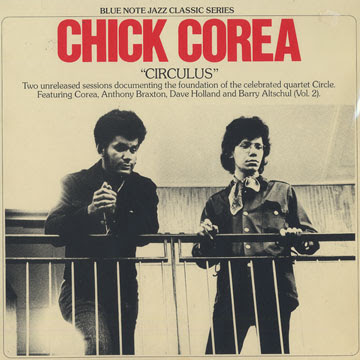 Also in February, the passing of Chick Corea and Milford Graves--who, improbable as it may seem, were both part of Graves' Latin Jazz group in the early 1960s, and whose respective directions suggest something of the options available: either fusion stardom or unwavering commitment to the avant-garde and undersung community focus. Predictably, I find Corea's early experiments, which have, so to speak, been marginalised in his own career, the more interesting: his ring-modulated electric piano in the Miles Davis 'Lost Quintet' (whose only recordings come from their relatively brief live tours of 1969 and 1970) was, years ago, a kind of gateway drug for free jazz; likewise, the swarming precision of his trio work with Miroslav Vitous and Roy Haynes and with Dave Holland and Brian Altschul--as well as the large ensembles on Sundance and Is--suggests a brief moment where he, Wayne Shorter and others were pioneering a brand of fusion, exploding from Davis' turn-of-the-decade bands, that had improvisational discovery at its heart, that burst all genres at the edges, rather than packaging up the most palatable elements of each in every-extending technical grandstanding and slick composition. So we have Corea on marimba(!) on Shorter's Motto Grosso Feio as part of a percussive thicket, slivers of slide guitar and cymbals crashing from both sides of the stereo picture; or swapping places with Jack de Johnette to play drums in the Davis Quintet--someone in the audience asking Davis what was going on with his new band and Davis replying that they were simply doing their thing. Above all we have his quicksilver piano playing, limber and lithe, bursting into dissonant runs enhanced by the ringing, bell timbres of the electric piano Davis had encouraged him to use and by the edition of ring modulation, blurring edges and adding multi-frequency possibilities previously encountered predominantly in the realm of avant-garde classical music. Even when playing acoustic instruments--as he continued to do until the formation of the first Return to Forever band--something of the approach taken from the electric version seeps into the style: a preference for harmonic ambiguity, for responsive and declarative statements that are open to flux and change. (Historian Bob Gluck's book on Davis' Lost Quintet provides some excellent accounts of this group and its place in the period, setting it aside not only the developing fusion movement but alongside other free jazz ensembles like The Revolutionary Ensemble and Musica Elettronica Viva.) Having formed a trio with Dave Holland and Barry Altschul, probably the furthest 'out' Corea got was the group Circle, with Anthony Braxton added to form a quartet. In some ways, Circle showed up both the interest and the limitations of Corea's free work, Braxton's coruscating precision sometimes making Corea's approach sound too technically flamboyant--those tendencies that would reach a nadir with what was, conversely, the band's most popular iteration, featuring Al Di Miola and the fusion variant of Stanley Clarke, whose playing with Pharoah Sanders had been so moving, melodic, strong, inventive. On albums like Romantic Warrior, it's as if endless run throughs of scalar patterns, tricky note combinations,  and sub-prog-rock fantasies of medieval feudalism(!) could substitute for heart and soul. I suppose we can blame dianetics--John Stevens tells the story of going to see Corea at Ronnie Scott's to ask if he wanted to do some playing, only to receive a scientology-infused lecture on making money and self-betterment.

But no need to harp on that. Corea's compositions were fresh and inventive, unfussy but subtle studies emerging from his deep love and study of Ravel, Chopin, Mozart--the children's songs, the solo work--and early Return to Forever (the first two albums), while hardly as earth-shattering as those other outgrowths of Davis' bands--the Tony Williams Lifetime, Herbie Hancock's Mwandishi and Headhunters or early Mahavishnu Orchestra--is insistently melodic, light and joyful, abuzz with earworms: flute, electric piano, Flora Purim's wordless vocals, Corea incorporating his early Latin jazz experience into an atmosphere and sonic texture unique to this particular iteration of the band. Likewise,  while the duos with Gary Burton can become a little samey, lacking the haunting space--and, dare one say it, the historical range--of, say Walt Dickerson with Sun Ra, tracks like 'Crystal Silence' rhapsodize appropriately, blissed-out, dancing and swirling. And for all the polish of the Elektric Band--RTF's medieval pomp replaced by a kind of corporate sheen--the acoustic music in particular that he continued to produce until his death showed him capable of subtlety, variety, wit, improvisational grace. Milford Graves, on the other hand--what can one say. Reinventor of drums, of percussion, of the rhythmic capacity of music: totally committed to music as communal, communicative, collective; totally nonpareil. Contrast Corea's scientology-inspired contention that making a lot of money and playing big festivals was the index of spiritual success: Val Wilmer's As Serious as Your Life uses Graves as a kind of test-case refutation of accusations that the New Music was elitist, followed only by a white bourgeois/intellectual audience, etc etc, memorably opening with a vivid account of a performance by a variant of Graves' Babi Music groups in his lifetime neighbourhood, Jamaica, Queens. Live performance--not in arenas but in community venues, outside, etc--was central to Graves' work, and the existing footage suggests the visual, holistic dimension of a music that incorporated movement as part of its total practice: saxophonists moving off stage to play in the audience, Graves playing his kit with his whole body or dancing away from it. Force, energy, joy.  More thoughts on Graves in a piece for Artforum here.
And, thinking once more of drummers who've reinvented the kit and the approach to the drums, I've just finished reviewing some Tony Oxley reissues for the upcoming Point of Departure--the long-unavailable February Papers--featuring among others, the superlative and criminally ignored violinist Phil Waschmann, and Oxley playing the edge of a knife blade with a violin bow--and more posthumous live evidence of his superlative duo with Cecil Taylor. More detail in those reviews, which I'll link when they've been published: for now, suffice to say that they're vital studies in Oxley's art and in the possibilities of the drums in improvising contexts. 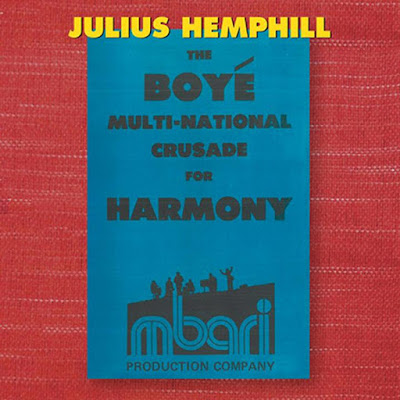 Elsewhere, in terms of new/old music, I'd be remiss not to mention The Boyé Multi-National Crusade for Harmony, the fantastic new Julius Hemphill box-set from New World Records, drawn from the extensive Hemphill archives at NYU: Marty Erlich's informative and thorough liner notes are here. Like that of Graves, Hemphill's is a music that bursts at the seams of recording. And so even this comprehensive and lovingly assembled box--a labour of love comparable to the Albert Ayler Holy Ghost box or the recent New York Art Quartet set, Call it Art--leaves me wanting to explore even wider. Among other things: to see Sweet Willie Rollbar's Orientation, the unfinished 1972 film that sees Hemphill, poet K. Curtis Lyle and dramatist Malinké Elliott wandering into a field of Dogon sculpture; to think about Hemphill's use of the minstrel figure against itself (Baraka's "renegade behind the mask") through the figure of 'Roi Boye', and other aspects of his use of poetry and theatricality. Revisting Benjamin Looker's history of the Black Artist's group, its excavation of that Fort Worth context--Hemphill, Coleman's younger cousin, hearing Louis Jordan from every window, travelling to Chicago to see the AACM (and refusing to join as he'd just go out of the army--he'd hung Nation of Islam posters in his room to try to get kicked out)--is certainly a good first step. And then: to think through Hemphill's use of the figure of Janus; his creation of works based on Ellison's Invisible Man--Todd Clifton's funeral speech juxtaposed with Soweto in 1976--of operas for massed saxophone, the brass band of army experience meeting the expanded ensembles of early and free jazz; the fact that he was the partner of the great classical pianist Ursula Oppens, for whom he wrote a superlative piano piece; to consider how it's possible that Dogon A.D.--recorded, as Looker notes, in less than auspicious circumstances (AWOL musicians, malfunctioning recording equipment)--is such an astonishing record. 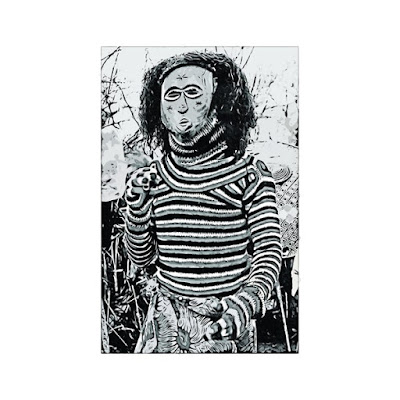 Music of more recent vintage, which explodes ideas of history, past and future in its haunted presentness, Moor Mother and Bill Woods' BRASS finds Moor Mother in more conventionally hip-hop territory than on her other recent releases from a busy 2020--the free jazz opera Circuit City, Irreversible Entanglements' Who Sent You?, and a live duo with AACM flautist Nicole Mitchell--but her words are sharply diagnostic, jarring and haunting as ever. From 'Blak Forrest':"I don't know time but I see it passing me / While the trumpets play casually / Sound like Albert Ayler, like 'Why these ghosts chasing me?'" 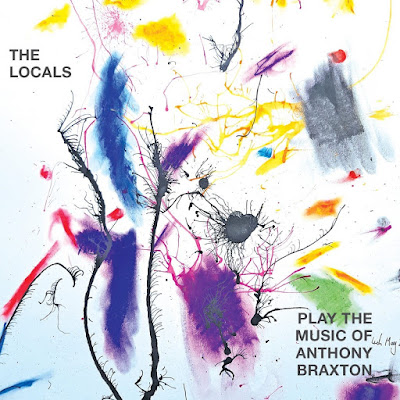 And finally, an ensemble put together by Pat Thomas back in 2006, and a record that, like the Oxley releases above, has been put out by Martin Archer's Discus label. 'The Locals Play the Music of Anthony Braxton' might slip under the radar, offering as it does funk versions of Anthony Braxton compositions, but it should be at the top of everyone's listening lists. Dominic Lash in a rare outing on bass guitar lays down the funk; Thomas is on piano and melodica; his brother Evan on electric guitar; Darren Hasson-Davies on drums; and Alex Ward's clarinet swoops and dives in joyous abandon. (I can only assume that it might approximate a semi-legendary band--to me at least--featuring the Thomases playing in the style of Ornette Coleman's Prime Time groups, of which I've heard tell but no recordings.) 'Composition 6C' might be the highlight: Evan Thomas' opening guitar squall leading to a solid groove and Braxton's melody dancing out in slick yet rough-edged unison, inexorable and irresistible. There's no way this should work, but it does--in the process telling something about Braxton's music that might return us to it with fresh ears.
Posted by david_grundy at 2/19/2021 09:47:00 am No comments: