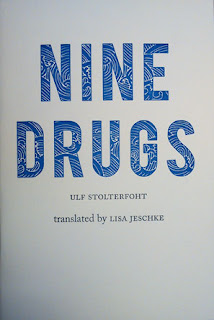 First thing to say is that, as with any of the steady steam of books made in recent years by Ian Heames, often with virtually no publicity (though the Face Press website is now operational once again, as per the link above), this is beautifully made and designed. The title font sees some sort of swirling whirlpool swimming in dark blue and white inside the letters of that title, perhaps a kind of useful analogy for the poems themselves, which serve as ironically sober descriptions of a series of different drugs taken amongst bohemian poetry communities. Reading this from outside those communities, it can be hard to place what’s going on: rather than the inside reference of coterie achieved through naming (though there are a few names, of the nine drugs which form the poems’ ostensible topics, of poets and musicians and locations – including T.Rex, Gary Glitter and Hans Sachs), we get a sense of community much stranger for not being clearly defined. (Perhaps the poem would become libellous if it did name: the sequence’s most memorable line, the curse “may their work rot unread.”) In any case, the obscurity into which small poetic circles might fall reflects at the level of form. Some of the poets here write poetry that they cannot understand themselves. This is perhaps analogous to the experience of a trip, the way that a drug experience might oscillate between a sense of collective being, of social and even universal connection, of the capacity to understand hyper-complex connections in a simple, singular flash, but might also provoke alienation, paranoia, total enclosure in self, “always close to / absence”. The same with writing. The sense of being at the edge of something: either a breakthrough, whether political, social, on the level of ‘consciousness’ or poetic form, or of total collapse. “nutmeg: before taking a whole nut, push your poetry to / an end. then however you like it: collapse or lethargy. / sink to your knees, pray.” The stakes here might actually be life and death: “in case of an overdose, / a topos position itself right in the middle of the sentence, obstructing / rhymical progression.” Drug-induce “aporia” the cost of ‘finding one’s voice’, alien in the poem. “what luck for their poetry, how devastating / for their soul. all in all, heslach has thus far delivered / eight exquisite poets. deep dark night covers twelve others.” The poem as a transaction between “recipient” and “supplier” reaches a stage of “full dissolution” and “melt[ing] together into a poem thing” – perhaps as a manifestation of narcissistic delusion. Poem as analogue for trip, for process of ego-formation; or vice versa. The term ‘self-reflexivity’ just doesn’t cover it.

It would be easy, perhaps, to dismiss the poems based on a summary of their ‘content’ as some sort of post-Beat drug binge, but that is precisely not the experience of reading them. These are gnarly and odd like nothing else I’ve read recently. In part this comes from the way the poems temper any tendency towards a self-valourizing autobiography of bohemian community as moment of collective possibility retrospectively used to boost fading careers and failing creativity with speculations on precisely such trajectories: and function as factual reports, somewhere between descriptions of physical symptoms prompted by the particular drugs and various narratives of the context in which the drugs might be taken and the significance for the composition of poetry. The speaker’s tone is located somewhere between affection, nostalgia and a caustic satire of bohemian life. So that when he says “for young white drop-outs poetry / and improvised music were the only way out of the ghetto”, we read genuine desire and possibility alongside, or perhaps through, the bathos of retrospective near-sarcasm. Concluding that perhaps “the best drug is a blank sheet”, the poem’s prosaic delirium is “resounding excellent song.” Lisa Jeschke’s hard-worked translations do an excellent job in conveying the tone and form of scrupulously off-centre precision which, from my almost entirely absent German, I presume inheres also in the original.

Luke Roberts’ latest self-produced book is a small pamphlet which, as title suggests, fits away neatly wherever you put it. Something to carry around, rewarding return visits, small doses sinking in. A short lyric sequence, like a palette cleanser, after the politicised pastoral and the surrealist pastoral and the filtered birds and landscapes of the preceding TO MY CONTEMPORARIES and SORBET, in which the poet finds themselves in the city, breath and treading lightly under the gently loving cruelty of the winter sun and the filtered shadowy glare of Brexit: “Europe the sun and my hangover.” The lines are gentle zingers, zingingly gentle, of a particular quality with which the poet could run and run, but lets themselves run on just enough, no more,  with enough of a kick and a reversal (not quite a sting in the tale) to ensure that things don’t run too smooth, too sweet. Perhaps not wrong to detect shades of Peter Gizzi in the melancholy falling cadence; maybe because I just picked up his chapbook THE WINTER SUN SAYS FIGHT from my shoebox full of pamphlets (poems subsequently collected in ARCHEOPHONICS, the prime lyric product of Gizzi’s 2015-2016 year in Cambridge as the Judith E. Wilson Poetry Fellow: I hope to return to and write something about this soon). Or OK, another coincidence, but the American pianist Ran Blake’s ‘The Short Life of Barbara Monk’ (https://www.youtube.com/watch?v=1tlWitva3Z0)  is a composition based on a pattern of two parts, the first a rhythmically light and lilting memory of childhood skating, the second of life taken away too soon, the realisation of this break. A play with time, repeating the circuits of loss and hope, always ending on the hope, or you hope it will. And you can always press play again. Returning to Roberts, if, as the citational citation of the final poem in the sequence has it, the possibility of “collective life” is stymied, and art contains the promise of collective life, the poem holds up a negative mirror, goes on despite itself, but its fluent and fluid urge to song is not delusional. Roberts’ poem has its movements, its moments. The cover design suggests train lines, or movement on foot. Perhaps you’re waiting at a stop, or lines are running through your head, a rhythm both within and against that of the flow of labour around the city. A pocket song is something small that you can take out or put away, small change. It’ll unfold if you want it to, will compress just as easily. “In the city sincerity flew.” Climbing to the building’s top floor, descending again. The poem’s first person feels more integrated and comfortable with the possibility of speaking in and to the second than in previous work, an earned reward, yet not a resting laurel, declaring its own funeral in the moment of its achieved consummation. This is how poets keep their ear in, or is it eye. And this, too, is how we as readers can be carried on by the words the poet writes. “We love the urgent sun / in its emergency”. Essentially: “love unbroken by the sun” is a killer closing line, and the poem earns it.