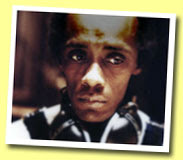 Sad news: Marion Brown passed away on October 10th. Absolutely one of my favourite 'New Thing' saxophonists (well, New Thing and beyond, into early ambient (with Harold Budd), AACM-style 'little instruments' avant-gardism ('Afternoon of a Georgia Faun') and straight-ahead jazz, later in his career); he was also an ethnomusicologist and composer. He hadn't been playing for a number of years due to illness, though his 'profile' might have been raised somewhat in the rock world by the fact that His Name Is Alive released a (very lovely) tribute album a few years back.

Below, a track from the 1967 album 'Porto Novo' - perhaps one of the very finest recordings from the free jazz era, and yet somehow still out-of-print (though I posted a full rip from the LP on this blog, some time ago); from the same year, some gripping concert footage of Brown in free-jazz mode; by way of contrast, his meltingly beautiful interpretation of Harold Budd's composition 'Bismalli Rrahman Rrahim' (not the lengthy original performance, but a reworking from the album 'Vista'); and finally, Brown as composer - his Jean Toomer inspired piano music, as played by Amina Claudine Myers.

I presented a two hour radio show on Brown back in 2008 - unfortunately there wasn't time to play anything from beyond 1974, but there's still a decent range of stuff on there, I think.

As I wrote on this blog a few years ago:

Despite his neglect, [Brown] was certainly as good an improviser as the better-known 'New Thing' musicians [Archie] Shepp and [Pharoah] Sanders. All along though, he wasn't so much 'New Thing' as into his own thing - a good dose of classical influence, an interest in ethnic musics (which, admittedly, Sanders and Shepp shared), and, above all, a sparer approach than the other two musicians. Whereas Shepp and Sanders were well capable of emoting to great effect (the prelude section to 'Creator has a Master Plan', or Shepp's gorgeous, impressionistic reading of 'In a Sentimental Mood' (from 'On this Night', 1965)), Brown was more understated, relying on the carefully chosen phrase, on clear motivic development rather than the pure sound/smear/scream tactic. Listen to the phrase he plays in 'Improvisation', from 'Porto Novo' (a phrase which also crops up in his solo on one of the other tracks). Just perfect.

There's a general quality to a lot of his music which is hard to define, to pin down, but can nonetheless be found on some very different recordings. Listen: it's there when he takes elements of the keyboard-rich sound found on early Miles Davis fusion - all those twinkling electric piano melodies and chordal textues - to build something that's soothingly lovely, static and hovering ('Sweet Earth Flying'); it's there when, with different instrumentation, he conjures up the wonderful, hazy, later-summer, small-town feel of a piece like 'Karintha' from 'Geechee Reccollections'; and it's there when he presents a challengily indeterminate avant-garde soundscape on 'Afternoon of a Georgia Faun' - music which seems to be half-asleep, yet is crafted with subtly shifting, delicate improvisational care.