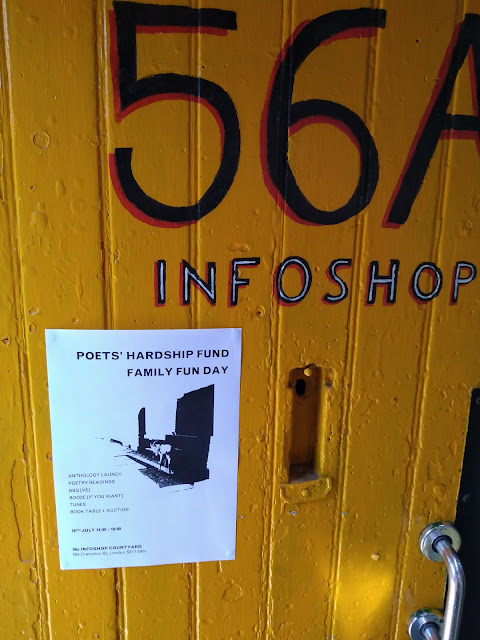 Later that evening, I went to see Eddie Prévost perform the second in a series of eightieth birthday concerts he’s giving every Saturday this month. Prévost grew up in a bomb-blasted Bermondsey. In the film Eddie Prévost’s Blood, he remembers going to a school with his single parent mother who said “you won’t get in here because you don’t have a dad with a top hat”. Prévost had never heard of John Cage when he began making music with AMM in the mid-sixties: instead, he was looking for sounds he hadn’t heard before, channelling his social experience, his sense of a world within and beyond that experience. In the years since, he’s devoted his life to an art form—that of freely improvised music—that, like experimental or avant-garde poetry or whatever it is we call whatever we’re doing, receives almost no funding, no recognition, and whose social value is dismissed out of hand. But as Prévost said from the stage, the practice of free improvisation is not about knowing per se, but about knowing by doing, knowing through practice. The senses are theoreticians, we know what’s to be done, though that knowledge isn’t easy, though it’s imperfect or awkward or broken or fractured. There’s a beauty in process, in the operations of the dialectical, though there’s a danger, too, in valorising process over endpoint. If all we have is process and all they have is an endgame—including control over the means of production of death, that ultimate endgame—then we’re fucked. Well OK, we’re fucked. The process is constant. We keep having to begin again, to build it up from a diminishing set of resources. Well OK. We keep going. It’s a start.
Posted by david_grundy at 7/17/2022 12:17:00 pm No comments: