Just a brief post about this, which I attended at the Red Rose last night - four hours of superb music. Lots of interesting combinations and groups - lots of variety - from the opening blues number by Mike Westbrook to the Robert Jarvis/Lawrence Casserley trombone/electronics duo, to the 'Political Duo' of Veryan Weston accompanying Maggie Nichols singing 'L'Internationale' and so on, to appearances from the likes of Harry Beckett, Keith Tippett and Kenny Wheeler (and not forgetting the climactic performance by an augmented London Improvisers' Orchestra). A suitably vibrant and adventurous tribute to the late Paul Rutherford. Here are some videos, taken on digital camera over the course of the evening - the quality is pretty poor (and the sound cuts out whenever I zoom in), but I think it gives a decent impression of the music that was played.


Harry Beckett on trumpet, with Nick Stevens on bass and Tony Marsh on drums. Fine stuff.


Robert Jarvis on trombone and Lawrence Casserley on electronics, producing some mesmering sounds towards the end of this clip.


An extract from the final performance of the night, a collective improvisation by the London Improvisers' Orchestra. This is one of the quieter moments!
Posted by david_grundy at 10/25/2007 04:57:00 pm No comments: 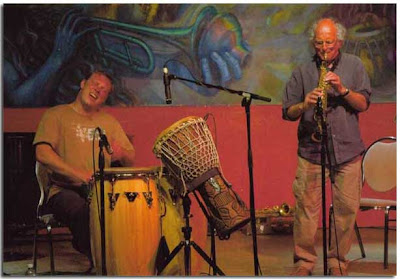 Pretty late notice, but a quick head-ups for this gig - if you're able to get there, you should definitely go along. Trevor Watts is now the sole surviving member of the Spontaneous Music Ensemble following the recent death of Paul Rutherford. Time Out magazine describes this as "intoxicating tribal jazz-dance with an emphasis on Latin rhythms from the saxophone and percussion duo, supporting their recent album 'Ancestry'."

I have been asked to give a review of Hot Rats by Frank Zappa. Here it is (this is a review of the vinyl version, not the CD, which has 5 minutes of extra music and is remixed, or something like that).

I guess the first track I should talk about is the second tune on the record, 'Willie the Pimp'. Having not heard 'Bongo Fury', I'm uncertain as to how the Zappa/Beefheart collaboration would pan out - I'm not too sure how well it would work, though of course some of their earliest musical experiments were together, as teenagers. As it is, Beefheart's contribution is pretty minimal, despite the fact that Lester Bangs thought his spirit inspired the whole record - all he does is sing the main melody, a simple and catchy 11-note tune, with lyrics about...well, being a pimp ("I'm a little pimp with my hair gassed back/ Pair o' khaki pants with my shoe shined black/Got a little lady ... walk the street/Tellin' all the boys that she cain't be beat/...Standin' on the porch of the Lido hotel/Floozies in the lobby love the way I sell"). Not sure whether Zappa's trying to poke fun at pimps, or at the people who use prostitues, or just to challenge the boundaries of good taste and amuse himself, but the words are pretty bizarre. Beefheart's voice, singing them, is its usual raucous, always slightly scary growl, but he soon disappears, signing with a trademark yelp, to make way for Zappa's long, long guitar solo. The music is far smoother than the work he's famous for - no jangling guitars going off in several different melodic and rhythmic directions at once here - as this tune is very much Zappa's show.

For some interesting background on the making of the album, this article is worth looking at - http://www.beefheart.com/datharp/capzap.htm. Seems like Beefheart and Zappa both had very definite ideas of where they wanted their music to go, but Zappa wanted to control Beefheart as well - though he liked its wildness, its irreverence, it just wasn't polished enough for him. Beefheart had an unpredictability that Zappa probably found both brilliant and immensely irritating - thus, when Beefheart tried to break glass, literally - "he took a deep breath and emitted a long-drawn-out yell. We inspected the window. Not a crack. 'I'm feeling a little tired,' he said" -"the door was thrown open and a furious Frank Zappa burst in: 'What the fuck was that?' he demanded. The yell had penetrated the studio sound proofing and leaked onto a track."

Anyway, wile Zappa's music is highly complex and influenced by European classical avant-gardists like his hero Varese, it's a different kind of complexity to Beefheart's. Whereas Trout Mask Replica, despite the months of secluded rehearsal time Beefheart forced the Magic Band to undergo, still sounds edgy, rough round the edges, not quite put together (the sound of the tape cassette being clicked on and off as Beefheart improvises lyris to 'Orange Claw Hammer', for instance), Zappa's most complex stuff becomes almost like clockwork at the time - the sort of thing that might be better played by machines than musicians.

I have to admit that I'm not the greatest fan of the Zappa solos that just go on and on and on. I may be a bit schizophrenic in my approach here - I can quite happily listen to John Coltrane torrents of notes and noise for hours on end, and even the loose, jam-session feel of Miles Davis' 70s work appeals to me, though both musics have their fair share of longeurs. You can hear the Blues influence in Zappa's playing, but it's filtered through a differnet sensibility - it's not just that it's made more technically complex (Ornette Coleman, for all his elaborate, impenetrable theory of harmolodics, retains a real gut impact, a heavy blues cry, in virtually every solo he plays), but the emotion seems to have been filtered out in exchange for axe-wielding wizadry. He's taken elements of the phraseology of blues players and combined htem with the 60s jazzman's penchant for length and dexterity, but combined them to produce an unsatisfactory middle ground (IMHO, of course).

It's as if he's always on the verge of breaking through, of connecting with the listener, grabbing them by the throat with a musical idea, but remains always just short of that moment, like he was playing behind glass. An annecdote about Larry Corryel could be relevant: he challenged Jimi Hendrix to a guitar duel, and played a complex solo for 10 minutes, unleashing all his jazz runs and tricks - then Hendrix played one long, wailing note and cut Corryel's solo to shreds in under a minute. Sometimes the simplest things are the best: saying more by saying less.

The Lester Bangs review from when the album first came out (read it on the Rolling Stone website here: http://www.rollingstone.com/reviews/album/248920/review/5940707?utm_source=Rhapsody&utm_medium=CDreview) praises it for its toughness and gritty edge, something lacking in a lot of the early jazz/rock fusion stuff being produced at this time (though I think that a lot of the late 60s/early 70s fusion was actually a lot grittier than what was to come later - for instance, compare the work of British musicians, like John Surman and John McLaughlin, Miles Davis' many excellent bands, and the original Tony Williams Lifetime trio, with later Weather Report, Return to Forever and so on). Bangs wrote: "he's learning from the new jazz heavily...and applying all his technical savvy until the music sounds a far and purposely ragged cry from the self-indulgence of the current crop of young white John Coltranes." He did admit that the guitar solo on 'Willie the Pimp' was not the record's finest five minutes: "[Zappa]'s not really a jazz improviser, and his repetitious and surprisingly simple patterns get boring before he's half-way through" (this criticism is slightly different from mine, in that it's not so much simplicity I have a problem with as what I see as a distance from emotion and a concentration almost entirely on instrumental prowess as an end in itself).

However, I can't help thinking that the whole slant of Bang's review is slightly bizarre and off-kilter, and doesn't chime with my experience of the album at all. He concludes that, "if you're eager for a first taste of Beefheart or interested in the new approaches to instrumental style and improvisational technique being developed these days, this is as good a place to start as any; a good stepping stone to folks like Ayler, Don Cherry and Cecil Taylor-the real titans these cats learned it from." Hm...I somehow don't think this sort of jazz/rock fusion has much in common with any of those names: Don Cherry's pithy and slightly sour-round-the-edges melodicism, Ayler's transcendent altissimo wails to the heavens, Taylor's cascades of sound, his assaults on the keyboard and challenges to how much musical information you can take in in a few seconds. Zappa superficially includes elements of more experimental jazz, such as wailing saxophones, but, just as with Beefheart, they are pursuing their own course rather than. You always read people mentioning Ornette Coleman when discussing the sax/bass clarinet stuff on Trout Mask Replica, but it's light years away from Ornette's saxophone work - maybe it's closer to his playing on trumpet and violin (which, after all, he couldn't really 'play', in the normal sense of the word, and used more for an immediate colouristic/emotional impact), but still. Similarly, I think that to equate Zappa's ironic, self-conscious, knowing, parodistic, schizophrenic muscial style with Ayler's combination of frenzied religious intensity and the simplest of folk-style melodies shows that the critic hasn't been listening to Ayler very closely, if at all...

So what is this record then? I think the best description I've found is over on another internet blog: "soft jazz-rock." Far from being the gritty, free-jazz tinged music Bangs characterised as, it's . Accessible and sunny, full of textural interest (one of the earliest experiments in multi-tracking I believe, building up layers of Ian Underwood's organ and reed-instrument playing to create the sound of a bigger band than is really playing). Sugar Cane Harris and Jean-Luc Ponty are fine on violin (I would urge you to check out Ponty's jazz album of Zappa tunes, 'King Kong'), Underwood is fine on saxes, etc, the rhythm section is tight.

The melodies are killers...'Peaches en Regalia' is just insanely brilliant, perhaps Zappa's best tune. It drives you round the bend with its catchiness, but you can't help feeling uplifted by it. The intro to the 'The Gumbo Variations', with its acoustic jazz bass, is a killer. Everything is good...The record seems relatively irony free for a Zappa album, and that's perhaps the best thing about it - despite the sometimes over-indulgent instrumental virtuosity on display, it's happy just to be entertaining music and not to indulge in the polemical/scatalogical/bad taste/self-indulgently weird shennanigans that seem to characterise even Zappa's better albums. Not a classic, maybe, but always a solid fusion record, and sometimes more than that.
Posted by david_grundy at 10/02/2007 12:33:00 pm 1 comment: