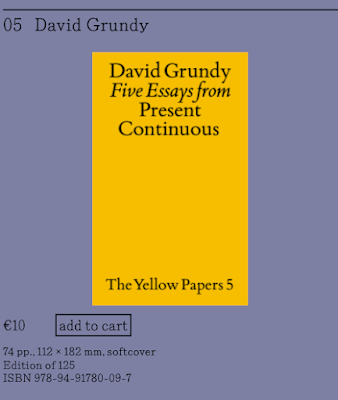 I have a new prose pamphlet out from Phil Baber's The Last Books, in the Yellow Papers series: Five Essays taken from a longer MS called Present Continuous, the full version of which will be published by Pamenar Press later in the year). Phil makes beautiful books, and his care with typesetting and design, as well as his attentiveness to the text itself, doesn't go unnoticed. You can buy the book here, and I'll be launching it in London on April 1st.

In the virtual world, a long interview with Dave Burrell is now up up at Point of Departure, taking in Mr. Burrell's astonishing, decades-long career. Along the way: the Berklee College of Music, working with Giuseppi Logan and with Sonny and Linda Sharrock, the Pan-African Festival in Algiers, the 360 Degree Music Experience, the little-known duo record Questions and Answers with Stanley Cowell (pictured above), his remarkable--and still unproduced--opera Windward Passages and his recent historical pieces on the American Civil War. Many thanks to Dave, Monika Larsson, and Bill Shoemaker (and wishing Bill a swift recovery from surgery). 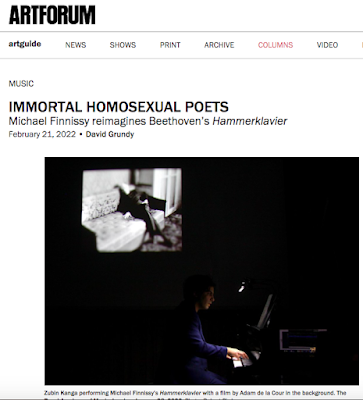 Also virtually present: a piece on Michael Finnissy's recent Hammerklavier, as performed by Zubin Kanga at the Royal Academy of Music at the tail end of January, is up at Artforum. (Thanks to Zack Haber and Chloe Wyma.) The performance followed up on the concert premiere a few months ago of Finnissy's wonderful--and quite different--piece for solo harp, 'Our Proximity to Gothic', also at the RAM; Finnissy's output, as anyone with the scantest acquaintance with his work will know, is prodigious, each piece a world of detail, of historical reference points and of an exquisite handling of form, timbre, texture, structure, and these new works further evidence--if any were needed--of his importance in the contemporary music landscape (even as their temporal range makes terms like "contemporary music" seem inadequate).

Finally, a longer piece on the Julius Eastman revival of the past few years (following up on previous writing on Eastman on this blog) is up at 032c. (Thanks to Shane Anderson.) It was a particular pleasure while writing this to explore the recent interpretations and recordings that have begun to emerge some of Eastman's more obscure late work. Julian Terrell Otis' beautiful rendition of Eastman's 'Our Father' encapsulates what's so striking about the music Eastman went on to write (or, in many cases, to perform without score) after the more famous pieces for which he's now known: a condensation, a reduction, a focus stark and haunting. I made a YouTube playlist of some of the available performances as part of the research--you can find that embedded below. 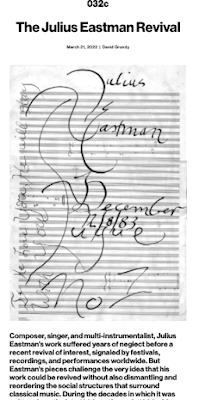