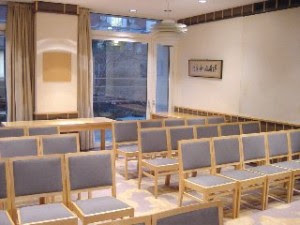 [Above] The Nihon Room is a formal function room, which takes its name from Nihon University in Japan. The University made a large contribution towards the cost of building Foundress Court.

John DeWitt, on a visit from Uruguay, moved through generally short poems, often in translation and dialogue with South American poetry for which my linguistic capabilities and general knowledge are woefully inadequate; sharper and shorter contours (in terms of lines) were traced in an on-going collaboration with Rosa van Hensbergen, of which he read part; out of it all, a line about the sky being our most truly communal possession, rising above a land-fill site – the idealist cynicism, was it, of that, being quite striking and beautiful, though, this being only my fragmentary memory of it, I'm probably betraying it out of the context of the poem from which it sprang out at me.

Lisa Jeschke's work would generally be described as 'theatre', which it is, though of a kind which merges and emerges from – list – performance art, fluxus, instruction pieces, textual fragments, rigid part-parody formalism, stringent abyss-peering, uncomfortable laughs. Over the past few years, seeing her work with Lucy Beynon, in that scene of artists loosely or not loosely associated with Judith E Wilson drama studio facilitator and maker Jeremy Hardingham and with artists currently or previously based in Berlin, has had a real, if sometimes undetected influence on my own thought and way of seeing things, as I’m sure it has for others also. I mean, you can't really forget something like the duo piece 'John Hurts (from Idiot)', which I saw twice in two days, in the dark, able to trace out its formal moves the second time, tho' still shocked and stunned and drained by the wailing harmonising canto of a sung voice holding out alongside Konrad Bayer's shit-list: "theatre is a pile of shit. art is a pile of shit. science is a pile of shit[...]life is a pile of shit. death is a pile of shit. the day is a pile of shit. the night is a pile of shit". The poetry that Jeschke read tonight, some bits of which, but only some, I'd seen before, was a whole of new and reconfigured fragments, placed into a seemingly rigid formal architecture, rather Cage-like in that kind of aphoristic structure, 24 viewpoints or variations on things like nothing (nothing? nothing) and speaking and not speaking and agency and non-agency. It was, oh, I guess, 'performative' in a way that DeWitt or Brady were not, and that was refreshing - tho' I expected nothing less - and its mock-rigour and real rigour dealt with humour and with the joke in ways that the boys' club tittering of some readings can't reach, in that the communal sense of release and relief might and can and does comfort (wrong word, they're not exactly soft punch-lines) more than Jeshke's deliberate de-stablilisation, catching us off balance, rigorous in its argument, in its skewering of any over-idealistic claims for agency while never retreating into scornful cynicism of an empty or unnecessary sort. (I've just picked off my shelf a pamphlet "Live from Occupied Lady Mitchell Hall" (November 2011) in which a two line poem by Jeschke is placed underneath poems by Marx, Alexander Blok and Mayakovsky, and whose dig at Debord acts as a necessary undercut or check to any claims elsewhere, as 'political poets', we might make, like "occupy everything, be everywhere at the same time" or some such shit. Saying, what is poetry, or theatre, *really*, and publically? Or not publically? "It is strange that everyone always speaks of the theatre as the paradigmatically public form of art." “Stand up, then.” Which is pertinent to what was happening in that room, what social group is in those four walls, what elsewhere outside.) There were less laughs than there might have been, though it was not Jeschke's intention, to not provoke laughter – that, in fact, being the intention, or the half-wished for side effect, often – laughs that catch and die or that carry on. Something to do with the room that night, the feeling of the place, the hideous dog's-mange carpet, the conference-location ambience – tho' that tension was in itself something that the work seized on and fed off, in situ. (A passage of rapid-fire mellifluous variations, in German, on a line from W.S. Graham ordering us to imagine, got the most laughs.) Poetry as clear-eyed as this, and as subtly complex in its generic manoeuvres, without archness of affect, throws some cold water just when and where it's needed, "rest[ing] on restraint," asking itself and us what it can do, not answering that question, doing it, trying to, singing silent night, twice, who else would dare.

Andrea Brady's reading covered work from the early 2000s up to the present; as such it seemed intended as a kind of mini-career summary, perhaps influenced by the fact that Cambridge is the place with which her work is associated in most people’s minds, even if now, as an American in London, that geographic pinning down does not any longer hold. So the reading could help both Brady, and us, see where we, and she, were. Or something of the sort. One could say that the trajectory marked was from intense and intensive political engagement - intertwinings of sexuality, consumer desire, imperialism - to something more classically 'domestic'. Indeed, in an interview from 2010, she says: “I am sad to recognise that as I get older these momentary eruptions, urges and desires come less frequently. My time and my thinking is so fragmented. I don’t write at work anymore; I work at work. I am happily settled in love so I don’t write those driven, manic, disguised love poems which are first of all acts of persuasion anymore either.” The dilemma of poetry as work or as vocation, or as both. How to write professionalised poetry that doesn’t betray itself. Nonetheless, to see that trajectory as too rigidly evident would be crass – the poem 'geld', from a sequence on the photomontages of Hannah Höch, was nothing if not political – the pun on ‘coppers’ feeling curiously apposite in the light of last year’s sudden upsurge of politically-inflected protest language – though it is true that the later work fascinates for its meditation on the social structures fostered and created in what is too often seen as the apolitical, even reprehensibly so, world of infancy and parenthood - love not as a defiant sexuality, bristling against institutional sadism and, say, hoping to defeat it while still unbearably reflecting it – but as mediated through (more traditional?) social relation and through individual relation, as the passing on of law consciously or unconsciously, of finding oneself as the first figure of authority for a child, of the pain and, glib word, responsibility of that. This is necessarily a post-feminist motherhood meditation - (I mean, it is from the legacy of feminism, not that we've got beyond feminism) - if we could call it that, which it partially is, and in toto isn't, so it's not about some relegation to a domestic sphere, Berthe Morisot or Mary Cassatt of the Cambridge poetry scene. Something, though, lacking in the more macho world of biting caustic bile and tirade, even the softness or ardent desire in that not always tempered by Brady’s sense of having to negotiate within the terms of long-term love. (Notion: read ‘Mutability’ alongside Douglas Oliver’s invocation of his dead Downs syndrome son, Tom, the “real mongol baby,” the “sweetness, ‘stupidity’ and near-harmlessness of a baby.”) But, look, no one here gets off easy. Putting her daughter to bed: “We put you down / in a cage, that comes with these instructions: / fearful loneliness is the condition / of your liberation, and will yield to pleasure / if not to horror and a dry mouth.” The first punishment: “Our group solidarity is dependent first on the discipline whose profit is happiness as conformity.” The urgent enquiry of these lines, of these poems, is a fearsome and tender thing.
Posted by david_grundy at 1/16/2012 06:29:00 pm No comments: