The dark side of English folk

Whereas much twentieth-century folk-inspired music seems rather twee and naive (part of its charm for a lot of people), the original material often deals with very grim subject matter, with the realities of life for ordinary people. That's certainly true of this song, which turns out to be about eating policemen! More specifically, about eating the Cutty Wren, the mercenary police who clashed with the peasants during the Peasant's Revolt of 1381. When the peasants managed to kill a 'wren', they would then eat them, to destroy the evidence and stave off starvation.

Phil Minton, more often heard in a free improvising context, takes vocal duties here, with accompaniment from fellow free improviser Veryan Weston at the piano. Minton's extended techniques are massively impressive, though his use of them can verge on the hystrionic. Or, to put it more favourably, he has a great sense of drama. Listen to the way he treats this song, giving it extra shades through adopting different accents and giving it all a gravelly, gritty fervour, as well as adding a dose of macabre humour to proceedings, to ensure that the lyrics' repetitive structure builds up an impressive cumulative intensity. His voice ain't exactly pretty, but then, he's not singing about pretty subject matter...

"...We're off to the woods said John the Red Nose

Comus' music, too, comes from a dark place. A band dealing in British folk/prog-rock, with a touch of jazz, they only released two albums: 'First Utterances', from 1971, and a 1974 follow-up, 'To Keep from Crying'. 'Utterances' is generally regarded as the best, a minor classic (though it was a commercial failure at the time - too dark and rough-edged for folkies, too folky for rock fans), whose songs deal with such happy themes as murder, the occult and rape, among other things. John Milton's poem/masque, from which the band took their name, describes the preying of a wood demon-style figure (inspired by the Greek god of drunkenness, festivity and chaos) on an innocent young girl, and this music has a similar feel of vulnerability, of beauty and innocence struggling to survive in a dark world. Sometimes this is conveyed explicitly, through dissonance and barking, animal-like vocals; sometimes more subtly (and more chillingly), by contrasting a peaceful-seeming musical surface with lyrics that speak of great suffering and anguish ('The Prisoner', which deals with mental illness). Indeed, singer Roger Wootton was in and out of mental hospitals, although managing to make the band's 2007 reunion tour.

This 12-minute piece, the longest on the album, unfolds in several sections, opening with what sounds like a theremin before the main melody comes in. After that fades out, around four minutes in, a beautiful section of fingerpicking guitar, with a feel of beauty in the face of/in spite of adversity, flowers in the mud, making it all the more hard won. There's a questing, roving feel to the harmonies; things aren't quite certain, they're struggling on the edge of settling down but remain perpetually unable to do so. Some flutes briefly join the guitars before that section fades out, and the theremin, and then the main melody, return. It's partly the instrumentation that makes this particular part so evocative, I suspect: viola, oboe, soaring female vocals, delicate guitar strum. As well as its emotional impact and strong sense of tone painting (this music practically screams 'English countryside'), the tune also reminds us of a time when genres converged without such a fusion seeming artificial or forced - you can hear traces of folk, jazz, prog-rock (in the somewhat episodic, suite-like structure), and even a touch of the old film score (easy to imagine this accompanying something like 'Wuthering Heights'). The fades lead me to suspect that his was edited down from a longer performance, or perhaps spliced together from several different ones; either way, a wonderful track. 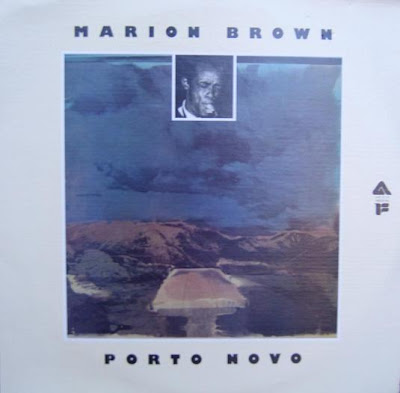 I don't do this very often (mainly because I don't have superduper hi-fi equipment), but here's an out of print album for download.

The sound engineering on the LP itself is slightly strange, really amping up Bennink's drums (I'm guessing the guy was more used to dealing with rock/pop musicians than the likes of Han), but at the same time giving them a really strange, off-kilter quality that's hard to describe. I think Chris Corsano (of the Flowers-Corsano duo) calls it "fucked-up."

It's a fascinating record, one of the strongest examples of Brown's 'purer' free jazz style (before he began to move towards more lyrical explorations with the likes of 'Sweet Earth Flying' and 'Vista', and, eventually, straightahead jazz (on 'Live in Japan' and 'November Cotton Flower')). Good as his albums for ESP-disk are, and good as 'Three for Shepp', on Impulse, is, they don't hold a candle to this one.

Altena's none too well-served by the aforementioned sound engineering (in the trio passages, it's Bennink and Brown who dominate), but, when he gets the chance to solo, he's heard to good effect, often producing sounds one would tend to associate more with avant-garde classical music than with jazz.

Bennink has moved on a heck of a long way from the somewhat edgy straight jazzer trying to keep up with Eric Dolphy on 'Last Date': he sounds propulsive, confident, brash, energetic, without cluttering the music. His playing here isn't quite up to Sunny Murray levels of cymbal-splash noise-bash (and isn't trying to be); neither is it the Rashied-Ali magic carpet colouristic approach, but HB's own maverick kineticism.

And Brown? Well, despite his neglect, he was certainly as good an improviser the better-known 'New Thing' musicians Shepp and Sanders. All along though, he wasn't so much 'New Thing' as into his own thing - a good dose of classical influence, an interest in ethnic musics (which, admittedly, Sanders and Shepp shared), and, above all, a sparer approach than the other two musicians. Whereas Shepp and Sanders were well capable of emoting to great effect (the prelude section to 'Creator has a Master Plan', or Shepp's gorgeous, impressionistic reading of 'In a Sentimental Mood' (from 'On this Night', 1965)), Brown was more understated, relying on the carefully chosen phrase, on clear motivic development rather than the pure sound/smear/scream tactic. Listen to the phrase he plays in 'Improvisation' (which also crops up in his solo on one of the other tracks). Just perfect.

I won't bother with track-by-track analysis: you can find that out for yourself. And some of these tracks were posted (in a cleaner rip) on the destination...out blog a while back. But I thought people who haven't had the chance might like to hear the whole album.

Here's the link, then. Info and scans included with the music.

The Cambridge Free Improvisation Society - Miracle of the Sun (2008)

Just under a month ago, I posted about material by the Cambridge Free Improvisation Society, which was being made available on the internet, and briefly mentioned the album 'Miracle of the Sun', which can be streamed from the CFIS' Last FM page. However, as that page doesn't seem to be getting any listeners, I thought I'd make it easier for people to get hold of this stuff, and am putting up a download link.

The Cabmbridge Free Improvisation Society - Miracle of the Sun

Get it here! (artwork at top of post)
http://www.mediafire.com/?ydcy9xthxgy