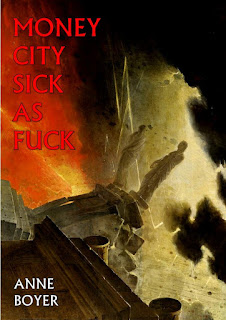 Very pleased to announce that Anne Boyer’s Money City Sick as Fuck is available for pre-order. Selected from a sequence of 100 poems written on a long day in the summer of 2013, Money City imagines writing a poem "in a confederacy of exception [...] called 'wages for tenderness and nothing else'". Situated between Pompeii and Olympus, at "Texaco in ruins" or the amusement park, in a bar called Lethe, at &the saddest prom in history, taking "every odd route", these poems passionately survey and survive the streets and jails of the modern-day polis,"sunbathing in Atlantis", oracles IRL.

Reserve your copy at http://material-s.blogspot.com/

And: Double book launch for two new books from Bloomsbury's Critical Poetic series, A Black Arts Poetry Machine and Lyric Pedagogy and Marxist-Feminism at May Day Rooms, Fleet Street, London, on Saturday 11th May, 7pm. David Grundy and Sam Solomon will provide a brief overview of the books and will share discoveries for their research. The presentations will be followed by an open discussion. See: https://maydayrooms.org/whats-on/
Posted by david_grundy at 4/30/2019 01:18:00 pm No comments:

Picked up from Brandon Brown himself in the Bay Area last summer, a month or so before his UK tour and wondrous readings in London and at the Sussex Poetry Festival, The Four Seasons is a book I've been living with for some time now. First things first, it's a lovely-looking edition (perfect bound, large-pocket sized) published by small (but perfectly formed) press Wonder – or, as the web address proclaims, Shit Wonder. And the particular brand of humour in that phrase, a kind of wide-open irony which manages to avoid either fatalistic bathos or recuperated sublime slipping in through the back-door, characterises the tone of the book as a whole. Written back in 2015-2016,  its title provides easy clue to its main thematic preoccupation: the organisation of daily lives into the broader temporal frame of seasons, which are "arbitrary in practice if not in legislation" (12). Not subscribing to the annual division from January to December, the book instead moves, in a manner arbitrary/not-arbitrary, from May Day to May Day: what Brown calls "my idiotic poetry calendar" (38). At one point, he calls seasons myths to live by (133); their balance between recurrence and passing, happiness and mourning giving the book its bittersweet airs.

The Four Seasons is a daybook, journal, diary, or sectional long-form piece of prose that doesn’t at first glance appear to be a ‘poem’ per se. It has the virtues of the more digressive and personal nature of the non-academic essay (and in that sense could be placed in a tradition of say, Romanticism – the period that perhaps most influences Brown, poetically, in terms of his reading). It can also be charmingly silly, rolling along on endearing stoner vibes (sample: "One day I got so stoned I thought I invented the word 'wow' "). But, on top of this, it's shot through with an understatedly meticulous attention to the roll and flow of language off the tongue -- which is ‘poetic’ insofar as it is vernacular and musical, conversational and artificial, citational and specific to the moment, sliding between the speaking and the written voice, a chatty and dialogic monologue, the result of a practice that nonetheless retains a keen sense of overall structure, and above all, timing.

When Brown reads the text out loud -- as he did at the Sussex Poetry Festival and for the Splinter Reading series in Lewisham during the heatwave last summer -- he leaves stand-up comedy pauses, extended beyond expected limits, looks around, starts again as if the lines he'd just read were improvised, that he'd just thought of them. (And after all, that balance between spontaneity and rehearsed routine is the drama of stand-up per se.) That movement mimics but is not equivalent to how it feels to track the work's pacing as you read. There’s this thing Brown does, particular in the first section, of alternating paragraphs, where one theme is held in suspension while another is introduced and then the other one is returned to, overlapping, interweaving, like balls moving through the air in the hands of skilled juggler. Is that too easy a metaphor? What I'm trying to talk about are the spaces / pauses between anecdotes / paragraphs, as observation succeeds observation, the original observation coming back in a few pages later, the thread picked up again. It’s very musical. Not pop song. Sonata form? Or canon? Or fugue? Recapitulation, modulation, development, repeating phrases cycling through a musical improvisation, or the variations on a theme: and weirdly, in terms of structure if not spirit, closer to jazz or sonata form than to the pop songs that drench Brown’s work (most notably the previous book-length Top 40, which cycles through the top 40 songs in the pop charts at one time as social index, record of the work routine and its opposites, what live alongside it).

The overall framing of seasonal order reversed, starts with summer through to spring: in Brown’s calendar, the connection to labour that the seasons encapsulate is central, with worker’s holidays present as respite but also with mendacious overlay, public festivities as at once repositories of social exclusion and nationalistic violence and of the carnivaleseque, the jubilee, the warmth of community.
The seasons for Brown are also ways of reckoning with mortality. The discourse here is not spiritual per se, though Brown uses the traditional framework of the voyage to the land of the dead in the book’s most extended and moving narrative passage, taking up much of the Winter section. Nonetheless, it is to do with those things that are the frequent terrain of spiritual / religious practices: memorialisation, mourning, and the reckoning with death and change: the relation to artistic peers, celebrity idols, and deceased friends, marked in rituals or temporal observances that are at once highly personal and collectively ritualistic. The journey to the land of the dead, which starts off destabilising-jokey, a kind of sideways stoner-slip into alternative mental realms on the way to the supermarket, and ends surprisingly moving, as Brown encounters deceased friends, poets, from Peter Culley to David Bowie. And throughout the book, a meditation on what it means for seasonal division to be the way we parcel up our lives – quoting David Brazil on the etymology of seasons, thinking about time and motion and space, what happens to the body placed in seasons, in the world.

Another recurring tic: "[insert author name] has a line like". There's a recurring joke, or trope, about a line of poetry that Brown might only have half-remembered, but won't go to the book and check-- "[insert author name] has a line like..." This is, of course, not laziness but a deliberate flipping round of our usual approach to citation / allusion, drawing attention to the way lines reverberate in memory and the way we, sometimes, make them something else, is important to the way the book works. This reaches its crescendo in the section where Brown tries to transcribe the entirety of Keat's 'Ode to Autumn' off the top of his head, leaving in the transcription with incorrectly- and partially-remembered lines, the morphed lines and the gaps of less memorable sections creating some strange new hybrid. Textual authority is (temporarily) subordinated to the practice of reading and remembering as intimate, personal, yet with a gesture towards common/communality that is central to the book's ethics.

This is what the seasons are for Brown, what they allow him to do: to index the personal relation to sweat and smell, the sweet leaking of flowers or the harsh bite of winter to index how those individual observations are shaped by and relate to literary figurations, and how these are all interwoven into the social fabric of the every day. In that sense, Autumn is Keats. And now, the seasons are Brandon Brown, forest fires or unexpected snow or early spring, wherever you are, whatever the climate.
Posted by david_grundy at 4/22/2019 04:47:00 pm No comments: