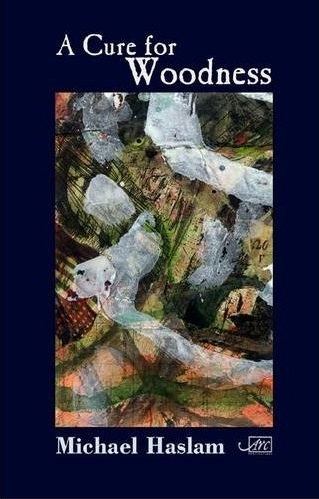 “The polymorphous parts / of sorry sores and soothing phoney story sorts” (‘A Bunch of Tales’).

Which seems to suggest that any chiming stories that are told are fakes, tho’ elsewhere, as we’ll see, the figure of wounds or bruises, blemish and waste and mess, stand more for a kind of down-to-earthness, a literal materialism that is multiple and, yes, poly-morphous (and poly-tonal, -phonic?), which H. wd most certainly endorse, and wish to participate within, in that self-description. And, let’s think about this: sound and stories have their linkage, in oral epic, the sounded refrain (refrain as both to sound again, and not to do so, to ‘refrain from’ – that dialectic in origin (as the original sensed of the word ‘rhythm’ clash between blockage and flow; as the Dogon word for ‘to open’ and ‘to lcose’ is the same): refrain, then, might be both affirmative action and negative inaction, refusal of action, excess and decorum.) And stories as sorting, arranging of multiple experience into one followed trajectory, one strand of narrative, akin (again I quote) to Hart Crane’s “one song devoutly bind[ing],” his “many twain[ing][…]in single chrysalis.” “Erosis” – giving over to eros (“woodness” as madness, including sexual elation, self-forgetting (madmens’ selves multiply, are forgot, become archetypical (Poor Tom, the generic crazed vagrant), also as erosion (of self? of land? of boundaries?) – the play in this section on ‘so’ sounds and on wounds, s’s and o’s, decay as painful wound (the "worm returning", penetrating in, as in Blake’s Sick Rose) and as ecstatic, tho’ “sickly bliss” – the holy fool, the blessed disease. A particularly striking conceit: clowns as nude weatherpeople (forecasters? rain dancers? the shamanic function sleeping right at the back of that most gleaming of regularized TV banality-bulletins, the weather report). And, ah, stars, as in Bunting’s ‘Briggflats’, that distance – “with starry gaps / of high renown.” A “cry” as birdsong, lyric O (not I) utterance, both the utterly personal and the inarticulate unperson’d, “sounding out of the depths of being” (Nietzsche), ‘O’ as folksong collective utterance at that moment of most personal pain (Prynne’s ‘English Poetry & Emphatical Language’), as danger/pain signal and as ‘music’ (birdsong – nature as decoration, no: “The cry might sound alarming. Clear enough. / It’s nothing personal. It could be couched / and may be decorated with birds.”)

“I don’t rhyme for the sake of riddlin’” (Chuck D)

And with that on, now, to what I think’s the best poem in the book, ‘Belabouring in Vain’. Here there's play on lyric as mass/ folk / fairy (faerie?) pastoral, not as gossamer Edwardian kids at the end of the garden but as rough reverie (wood dwellers misconstrued as spirits might be outlaws, wild (green) men, Winstanley’s commune trying to eke out an arboured existence). So we have leaking, pissing, shitting, ‘wages’ recurring throughout – cash, consequences (wages of sin); we have art as (parodied) lyric (French?) delicacy –“pull faces / thinking phrases for the lyric graces, lilac cordial, vanilla curlew and so on. And hammer on / until the limb’s gone numb” – from easily-slipped dance or drink to lifted hammer, beating out the rhythm in repetitive strain  – art literally become wanking about, as in – “They say it [Art] wanks / to wage thankless assault on taste, by means of / glorious plebeian ructions” – some coarser (Anglo-Saxon?) materiality. The eruption of that rough rusticity of a peasant-pastoralised lyric, not as distanced court dalliance, rural tourism (“a cheap holiday in other people’s [idealized] misery”) but from within the place itself, or from some vantage near enough in sympathy not to render its fantasies spun too wildly into regression and lie: the people, labour, material facts, material world – as against, again, the courtly nostalgized idealisation of yer common-or-garden non-political pastoral idyll (that non-politics of course implicitly and insidiously political in its conservative claim). “There are dozens of us delving in the mass / of gross behaviour” – a kind of free love orgy (“each labourer may love / his or her next or nearest neighbour[…]dreaming nakedness, I readdress thy face”) which is partly imagined as “reverie” and dream, perhaps akin to the gender reversals and temporary madnesses in Shakespeare’s ‘green worlds’ – As You Like It’s Forest of Arden, Cymbeline’s Welsh mountains, the Tempest’s Isle, Twelfth Night’s Illyria, and most particularly, A Midsummer Night Dream’s Athenian Forest. Here we might recall RF Langley’s poem ‘Cash Point’, in which AMND leaps into the present, with a cash point as the “hole in the wall” through which Pyramus and Thisbe communicate, that hole as a point of access between a world of reality and a world of dreams (occurring explicitly in a play within a play, a parodied love story, Romeo and Juliet played for laughs) – like Bottom, those that seek to escape, say, the urban world, the world of court intrigue or brow-beating end up being turned into donkeys, literally being made an ass of. Langley suggests that both Pyramus and Thisbe’s attempt to keep their love alive through the hole (the sexual punning obvious, that hole perhaps, even, as a glory hole, anonymising and rendering almost entirely individualistic what should be an ecstatic inter-personal closeness), and a modern attempt to “cash in dreams for reality, language for things” (in Jeremy Noel-Tod’s words), are efforts doomed to failure, fictions of consoling artifice: the quasi-magical exchange of a pin number for a piece of paper which will allow one to purchase material things is a kind of ‘cashing in’ on the dreams that, say, promises of endless credit encourage –“With your last twitch you can / point at the letters that make up / the spell” – ‘spell’ referring to words as well as to magic, to the act of naming a desire that, it is hoped, produces the material effects of that desire’s presence, but which ends up as just another deferral, another consoling fiction as are the fairies in ‘A Midsummer Night’s Dream’ (a play which, for AD Nuttall (in ‘Shakespeare the Thinker’) is “not escapist; it is about escapism,” subjecting its subject to a “philosophic scrutiny of the status of love-experience” to be “maintained to the end of the comedy”). If Langley remains sceptical about the consoling power of either cash or nature (elsewhere, he draws together a territorial dispute between a beetle and a wasp and the suspicion which led to the execution and torture of numerous women during the era of witch trials – misrepresentation, the fantasy of fairies and witches, as both consoling and dangerous, leading (as does the fantasy of endless cash and credit) to immiseration and exploitation), Haslam is more like Mercutio, in whose Queen Mab speech – according to Nuttall’s account of it – “wild imagination” ends up “outrun[ning] intellect”; and, unlike Mercutio, he starts off by wishing to believe, if not in the literal existence of fairies, at least in some notion of a consoling nature, or, at least, a nature that is both curse and cure, both the cause of madness and the restoration to sanity: and this can happen in a poem, which can question its own premises, its own wildness of imaginative fancy and sound-play at the same time as revelling in precisely those qualities, constructing connections not possible in the real world, perhaps, bending time in and around on itself to create constellations of country labourers, lyric poets, poetic work and the work on the land, not ignoring the structures of oppression within either, nor valourising himself as a kind of modern-day John Clare (who’s later namechecked), but as partly-parodied “yokel local-focal,” wandering in eccentric bumbling bucolic melancholia.

Aisha Orazbayeva: The Traces of Sound 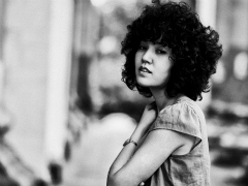 Enough, now, of this garbled verbiage garbage! Those, anyway, are the thoughts the Nono prompted – and I’d like to look further into it, time permitting – but there was a first half, albeit a brief one, so I’ll just briefly sketch that out before I call it a night. We were promised another work for violin and electronics, this time a premiere, by the composer Martin Matalon, but that had disappeared from the programme on the night, to be replaced by a couple of quickies from Lachenmann and Feldman, along with the advertised ‘Anthèmes I’, a Boulez soupcon). The Lachenmann ‘Toccatina’, in its complete avoidance of the rhetorical flourishes of the violin repertoire that even Nono fairly frequency referenced, felt nicely-focussed and serious in its intent – though, as with other Lachenmann pieces, I felt its workings-through of non-standard techniques to be still a little, I don’t know, schematic and repetitive, still too tied to certain tenets of classical form. This is, in fact, the criticism Radu Malfatti makes of HL in his Paris Translantic Interview, which I re-read a couple of day’s ago, so perhaps I’m being unduly influenced; what I will say is that the upwards and downwards movement of the initial string-striking (with base of bow) may have over-stretched its welcome, but the final minute or so, in which the violinist bows a different part of the instrument’s body in turn, sounded wonderful. (There’s a piece by James Saunders which takes that sound of bowed wood as its only source, and I didn’t find that too inspiring at the time, but I may be tempted to listen to that again after hearing Lachnemann’s more limited use of the same technique.) Orazbayeva, a refreshingly un-showy, focussed stage presence, moved straight onto the Feldman without a break for applause (perhaps some people thought this was part of the same piece, though I doubt anyone who possesses the slightest acquaintance with either composer’s work would make that mistake): ‘For Aaron Copland’, a five-minute piece from 1981, is like a sparser version of that closing viola melody at the close of ‘Rothko Chapel’. In its unaffected sobriety – a kind of reticent mourning – it becomes quite devastating, as I listen to it on my headphones through the medium of youtube at one o’clock in the morning, the rain outside having finally stopped. In concert, I remember being disturbed by the heavy breathing of an audience neighbour, that fuss making the five minutes seem shorter than it was (something of the, ‘O, is that it already?’ vibe stirring up, which I felt a little bad about; knowing that my (dis-)appreciation of the piece was not a result of performance or composition but of a silly momentary irritation). The Boulez ‘Anthèmes’, on the other hand, seems to me a less interesting piece in itself. Looking back on my write-up of the Boulez performances at the 2010 Aldeburgh Festival, I recollect experiencing ‘Anthèmes II,’ the extended version for violin and electronics, as somewhat glib – nice surface, but nothing particularly challenging or of lasting structural interest – and in solo iteration, there’s even less to hang on to, so that the thing felt more like a catalogue of particular techniques than anything else – not as virtuoso showcase, more as little experiments Boulez had been making and decided to turn into a fully-fledged composition. The programme note described it as ‘cold’; perhaps that’s right, though my main problem was that it felt too conventional in its violin vocabulary, in a way that the Lachenmann, with its non-standard techniques, and the Feldman, with its unadorned melodic simplicity, did not, and which the Nono for the most part did not either. Good stuff, altogether, though; and nice to hear this music on programmes and in venues that better suit it than pre- or post-chestnut Proms sandwiches…
Posted by david_grundy at 4/24/2012 01:30:00 am No comments: 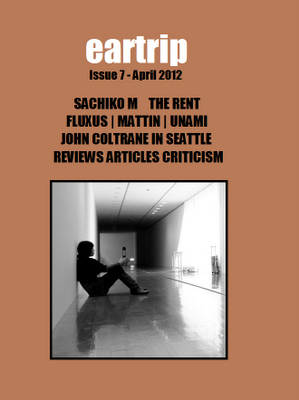