Autumn officially begun on Wednesday 22nd September, so I'm told: a little before that my physical copy of the Anthony Braxton Standards Quartet boxset from New Braxton House--released earlier in the year on the NBH bandcamp site--came through the letter box. Beautifully produced and designed as ever and, for my money, one of Braxton's best standards groups, recorded on a European tour just before the pandemic hit in early 2020. Samples and the digital download here (the physical box contains my liner note essay 'New Whats in the Tradition'). 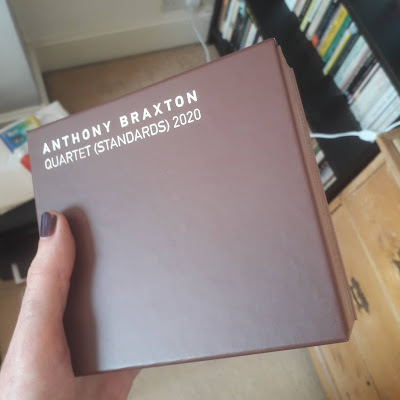 Other recent writing includes: a review of drummer Ches Smith's fascinating jazz / vodou project We All Break at Point of Departure, in which I touch (very briefly!) on the complexities behind the figuration of 'Latin Jazz' and the specific relation of jazz to Haitian music.

A poem in the new issue of UK little magazine Ludd Gang. All proceeds go to the Poets' Hardship Fund, one of the few sustained examples of mutual aid in the small press poetry community of recent years, and a vital service as the creative arts are particularly hit as the effects of the corona crisis are everyday exacerbated by the grasping ruling of a government of millionaires, denialists and bigots. As they put it:

After a decade of punitive austerity and a brutally mismanaged pandemic, the Poet’s Hardship Fund UK provides a channel for getting some money to poets who require it, without the kind of means-testing processes attached to similar kinds of efforts. While the scale of what we’re dealing with far exceeds any of our individual capacities for making change—the problems we’re seeking to address extending far beyond any discernible ‘poetry community’—we see this fund as, at least, ‘a start’. The premise is simple: give when you can and take when you can’t.

An introductory piece on Amiri Baraka's encounters with censorship, from the Floating Bear trial to 'Somebody Blew Up America'.

An obituary for saxophonist and composer Jemeel Moondoc at Artforum.

Also a sad recent loss, Maryanne (Patterson) Raphael has passed away. One of ten children, she grew up in Ohio, while at university joining a Black sorority as the only white student in a protest at racial exclusion, for which she was featured in Ebony and Jet; studied at the Sorbonne; and met poet and journalist Lennox Raphael in Jamaica in 1961. Facing discrimination as an interracial couple, the two travelled together over several continents, living variously in Rio-de-Janeiro, Morocco and Hawaii, and, in New York, joining the Umbra workshop. Raphael had a decades-long career as an author-predominantly of non-fiction--including a biography of her friend Anais Nin, The Voyage Within, a guide to surviving as a freelance writer, and a co-autobiography, with Lennox Raphael, of their life together (here reviewed by Umbra editor David Henderson). Her memoir of mental health, Along Came a Spider: A Personal Look at Madness provides wrenching but measure accounts of her struggles, also suggested in her correspondence with mental health activist Judi Chamberlin. Her work manifested a concern with social justice--whether mental health, the problems of child runaways, in a 1974 book on 'America's Lost Youth', or America's continuing racialised catastrophes. Though her best-known work was in prose, she also wrote poems and translated poetry. The 'Latin / Soul' issue of Umbra magazine, produced from California by David Henderson, Barbara Christian, and Victor Hernandez Cruz in the 1970s, contained the Raphaels' translations of seven poems by Cuban revolutionary poet Nicolas Guillen, whose work had earlier been translated by Langston Hughes. A few of those poems can be seen below. 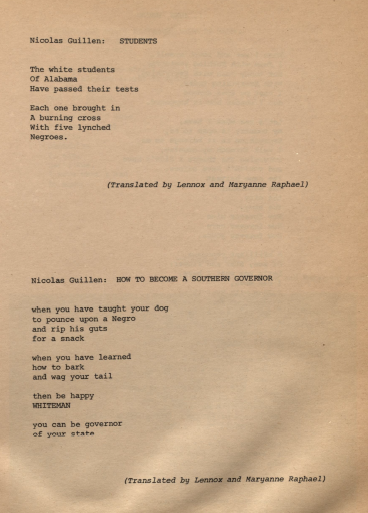 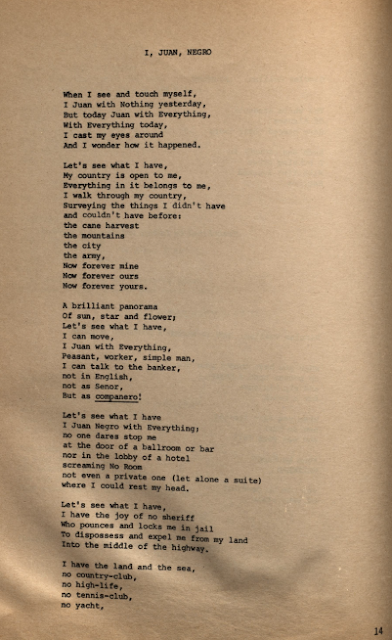 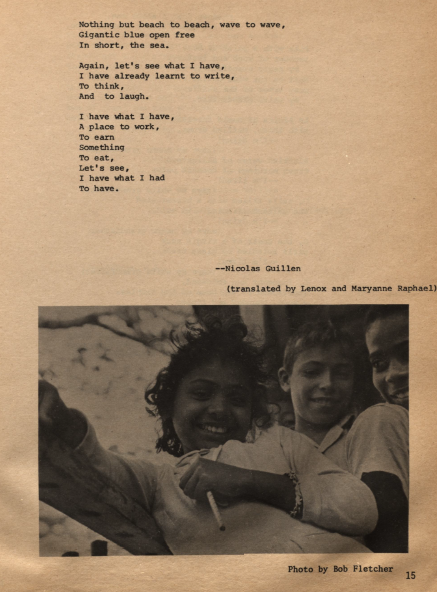 And here's Raphael's own poem 'Into Iron Cages' from Umbra's second issue, engaging with Civil Rights in the year of the March of Washington, singing across to the concerns of the Guillen translations in lines at once sardonic and social (sur)realist. 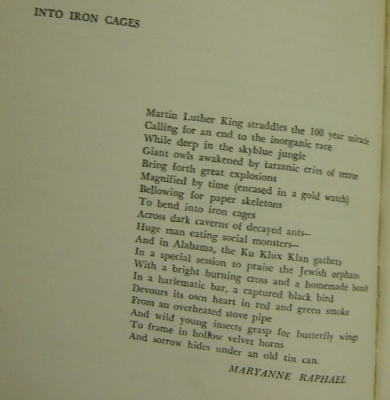 Despite the endorsement of Anais Nin, Henderson and others, and despite the strong sales of books like Runaways, Raphael's career never received much attention from literary scholars--a fate suffered by writers associated with Umbra in general, but all the more so the women associated with the group. As ever, the passing of such a life--as with that of Jemeel Moondoc--should prove further spur to the much-overdue work of recovery by which we can begin to re-tell the story of U.S.--and world--culture during the revolutionary years of the '60s and beyond, maintaining its fervid and necessary hopes even in an age of catastrophe. (For what age has not been!)