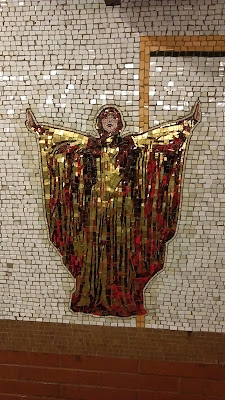 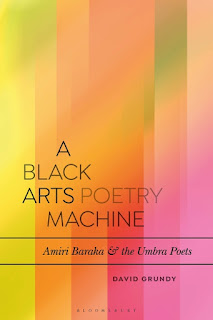 My book, A Black Arts Poetry Machine: Amiri Baraka and the Umbra Poets is out today from Bloomsbury today -- with many thanks to series editor Daniel Katz, and to the readers and peer reviewers who helped shape it into being. Here's the blurb:


“A vital hub of poetry readings, performance, publications and radical politics in 1960s New York, the Umbra Workshop was a cornerstone of the African American avant-garde. Bringing together new archival research and detailed close readings of poetry, A Black Arts Poetry Machine is a groundbreaking study of this important but neglected group of poets. David Grundy explores the work of such poets as Amiri Baraka, Lorenzo Thomas and Calvin Hernton and how their innovative poetic forms engaged with radical political responses to state violence and urban insurrection. Through this examination, the book highlights the continuing relevance of the work of the Umbra Workshop today and is essential reading for anyone interested in 20th-century American poetry.”

I guess that needs some background...The Umbra Poets Workshop was formed in the early 1960s in the atmosphere of artistic and political radicalism that saw African-American protestors disrupt the business-as-usual order of the UN building in New York in protest at the murder of Patrice Lumumba. One of the participating groups, the On Guard Committee for Freedom -- a political organisation -- essentially then coalesced into a more artistically-focused group, the Umbra Workshop. The group held regular meetings at Tom Dent's flat, in which they would get together to discuss each other's in-progress work, and were an active presence in the New York poetry scene of the time. Consisting of a fluctuating, but always large, membership, they aimed to form a publication, workshop and reading environment at a time when the poetry scenes around them were almost exclusively white. The group also started a magazine, of which two issues were produced during its most active period, with further issues appearing at periodic intervals later on, after the group had officially disbanded. 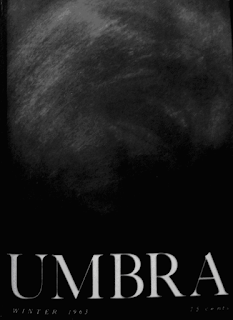 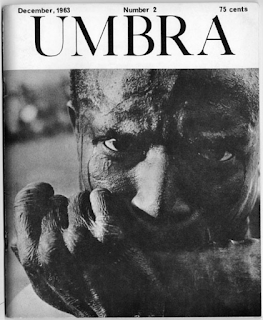 Copies of the magazine are rarer than hen's teeth these days -- there was talk of an Umbra reader coming out from CUNY's Lost and Found programme, but I haven't seen or heard any news of that for a while. Let's hope that something happens! But Umbra was always more than just a magazine. Calvin Hernton described the explosive impact Umbra Poets would make at readings within the predominantly white New York poetry scene of the time: sometimes appearing eight-to-ten at a time, they appeared, in his words, like "a dynamic, well-rehearsed black arts poetry machine". So while Baraka has often been essentially credited with 'founding' the Black Arts Movement, establishing the Black Arts Repertory Theatre/School in Harlem after Malcolm X's death in 1965 -- an enterprise in which members of Umbra were involved -- Umbra should be understood as laying the ground -- and, perhaps, offering examples of roads not taken. Umbra are sometimes credited in histories of the period as precursors, but their work is almost never considered in depth. Hence this book! (I'm also played to say that another book, by Jean-Phillipe Marcoux, is in the works -- watch this space...)

Of course, the Black Arts Movement challenged easy divisions between the political and the aesthetic, and politics was also key to Umbra. The book's first chapter discusses the 1961 UN protest and the emergence of Umbra, along the way offering readings of poems that emerged from the protest and its environment by Ishmael Reed, Raymond R. Patterson, Askia Toure, Ray Durem and Lorenzo Thomas. Here's one of them: 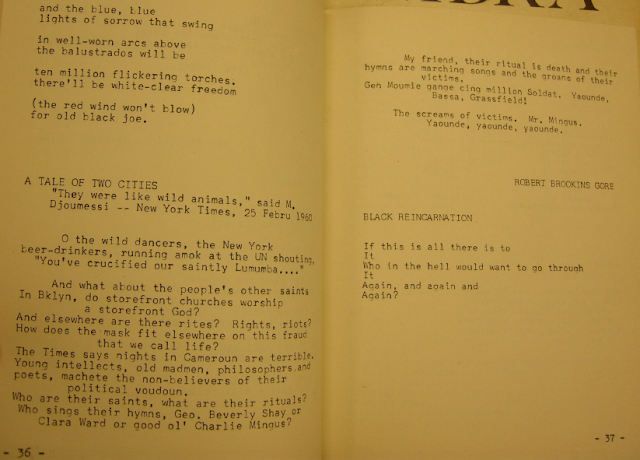 I use this chapter to argue that, at this point in time, tradition of African-American internationalism was already in existence -- involving Baraka, to be sure, but alongside many other now-forgotten figures, not least the Umbra poets. Umbra itself was short-lived, but it set in motion a number of hugely important careers -- to list them partially, beginning with perhaps the most famous, that of Ishmael Reed, but also of Lorenzo Thomas -- later on, a Black Arts scholar, and throughout, for my money, one of the most unjustifiably-neglected poets in America of the second-half of the Twentieth Century (though thankfully a collected poems is forthcoming -- this is a bit of a boom-time for Umbra, it seems!); and of Tom Dent, 'New Orleans Griot' (likewise, an invaluable Dent Reader came out last year -- edited by Dent's friend and comrade Kalamu ya Salaam, you can get it here); of David Henderson, maybe best known as the first biographer of Jimi Hendrix, collaborator with Sun Ra, Ornette Coleman and others, poet of what he calls the 'third eye/world' of diasporic culture in America; of Calvin C. Hernton, author of the controversial Sex and Racism in America, attendee of R.D. Laing's Kingsley Hall and meetings of the Caribbean Artists Movement, novelist and poet; of N.H. Pritchard, whose experimental concrete poetry has recently been addressed by Fred Moten and in Anthony Reed's Freedom Time; Lloyd Addison, perhaps the most experimental of the Umbra poets, author of prodiguous, often self-published output, allusive, punning and singular; Askia Toure (then Rolland Snellings), today one of the eminent grises of the Black Arts Movement; Rashidah Ismaili, whose Autobiography of the Lower East Side has been getting some recent praise, and who should (as is the case with all these writers) be far better-known; Steve Cannon, still an active figure in New York artistic scenes; did I mention that Archie Shepp and Cecil Taylor were also involved?! -- and all that's just the half of it...

Within a single book, I wasn't able to write on every member of the workshop, so, after the ensemble first chapter on the Lumumba Protest, each subsequent chapter focuses on one principal writer. Though Amiri Baraka was never a member of the workshop, he knew a number of the Umbra poets and invited them to perform in the Black Arts Repertory Theatre / School. (Here's Clayton Riley's review of the event for Liberator, alongside some images from the feature on 'five young afro-american poets' in French left magazine Revolution, which sets Baraka alongside Umbra poets Lorenzo Thomas and Joe Johnson, as well as A.B. Spellman and a very young Sonia Sanchez.) 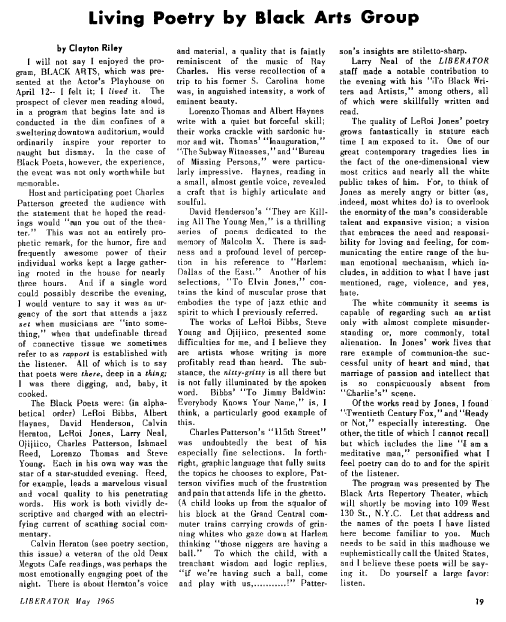 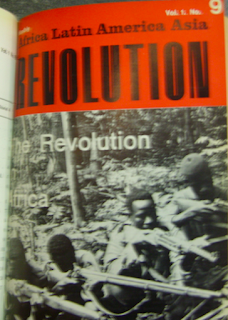 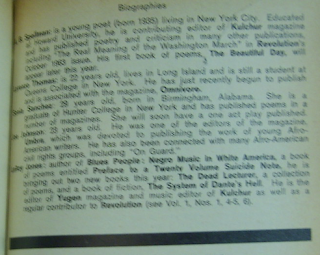 While Baraka's Black Arts work is too often taken in isolation, as if suddenly it emerged in an explosion of provocative militancy, setting it against the backdrop of Umbra helps us -- I hope! -- read it anew. So the book's second chapter turns to Baraka's response to urban insurrection and stereotypes of African-American militancy in the iconic mid-60s poems 'Black Dada Nihilismus', 'Black Art' and 'Black People!'. 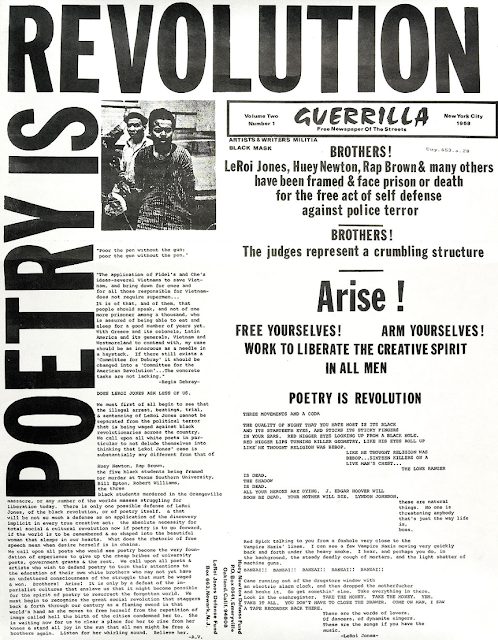 Guerilla: Free Newspaper of the Streets, Vol.2, No.1, 1968. Broadside edited by Allen Van Newkirk of the group Black Mask.

The third chapter concentrates on David Henderson's poetry, charting the complexities of New York racial politics at the time -- as he writes, 'Harlem to Lower East Side, space of a nation' -- and in particular the 1964 Harlem Rebellion, from which emerged his poem 'Keep on Pushing'. We then get Calvin C. Hernton's writings on riots, in poetry and in an incendiary essay 'Dynamite Growing Out of their Skulls!', published in Baraka's and Larry Neal's anthology Black Fire; and another Hernton chapter, on his poem 'Medicine Man', read for its complex and tortured address to the American South. 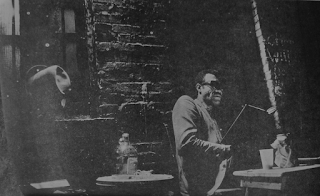 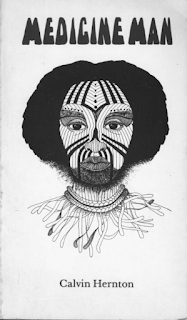 Next up, a chapter on Tom Dent, which touches on his work with The Free Southern Theatre, who courageously toured the South, eventually settling in New Orleans, and thence his own poetry emerging from the city -- notably, the long poem 'Return to English Turn'. Finally, there's a chapter on Lorenzo Thomas's poem 'The Bathers', one of the great poems of the Black Arts Movement, and its (re)writing of the 1963 protests in Birmingham, Alabama. (I also touch here on Ishmael Reed's amazing early prose-poem 'The Ghost in Birmingham' -- subsequently the first item in his collected poems, it appeared in the magazine Liberator in the early 60s and is as good an indication as any of just how the good the writing coming out of Umbra could be.) 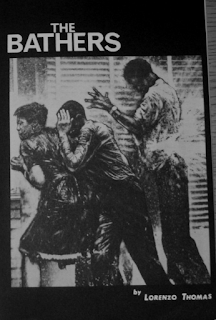 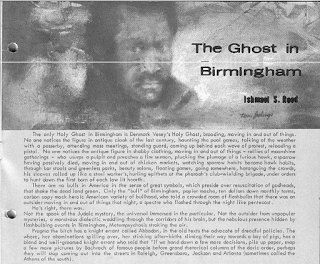 Anyhow...There's still so much more to be done on Umbra, and on this moment in African-American writing: let's hope that this is just the tip of the iceberg!
Posted by david_grundy at 2/07/2019 02:46:00 pm No comments: