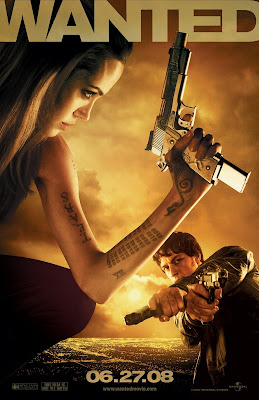 A blockbuster with a dislikable sneer about it, ‘Wanted’ explicitly addresses the idea of film as escapism, revealing in a way that is fascinating, though repulsive, the impulse lying behind cinema in its modern, entertainment-heavy Hollywood form: you, the pathetic loser working (say) at the checkout till, stacking shelves, stuck in a dreary office job, slacking through life with no discernable purpose, can, in the space of two hours in front of a big screen, get the girl, shoot the gun, drive the car, live through your fantasies, be the hero (invariably, the male hero). But it gives this wish-fulfillment fantasy, perhaps harmless enough in itself, a nasty twist: McAvoy, who’s been transformed from wimpish loser (or “pussy”, as he’s described) to action hero, delivers the film’s final line straight to camera. Having outlined his transformation (just one more time, in case we’d missed the rest of the movie somehow), almost as if he’s ticking off a checklist of goals/targets, he concludes: “This is me taking back control of my life. What the f*ck have you done lately?” Black screen and credits. Here, the scriptwriters have introduced a distance between viewer and film that shatters the usual identification of viewer with hero in a disturbing way – our reaction is perhaps to smirk, but also to cringe. Having satisfied the desire to be the hero that I outlined above, at the last minute the film snatches it away, anticipating the return to drab reality – and, indeed, not just anticipating it, but accentuating it.

One could argue that, though cruel, this maneuver is maybe an important reality check. However, I think there’s more to it than that. The suggestion latent in these closing lines is that, unless you do all the things that McAvoy’s character has done, you’re just a pathetic loser – yet the film’s morals are questionable. A train crashes off a cliff (said crash being partly due to the hero’s actions), so presumably everyone on it dies, but the film-makers aren’t concerned with in the slightest, focusing only on the three characters involved in the plotline. Such callousness advances beyond the norm, maybe – but, in what is becoming an increasingly predictable trend, hordes of extras are mown down in a particularly violent climax (not to mention the advocation of animal cruelty, as rats are wired up with explosives and blown to smithereens as part of the hero’s cunning plan to infiltrate the enemy stronghold).

That climax got me thinking: is it me or is there a trend for every new action film to contain every greater doses of car-crashing, bone-smashing, head-exploding violence? Such excess totally leaves reality, at the same time as maintaining a tenuous enough link to suggest that a particularly extreme form of hooliganism might be rather a fun thing to indulge in – because that hooliganism is essentially what it boils down to. As a zeitgeist, it’s a worrying sign – like the US soldiers listening to rock music and treating Iraq like it was a movie, or a computer game, rather than a sensitive situation dealing with a different culture and with human beings. I can’t help feeling that cinema, with its faceless dead guys being blown to bits on the edge of the screen, feeds this dehumanizing of the ‘other’.

In this mindset, all problems can be dealt with by violence (hence, in ‘Wanted’, McAvoy verbally lashes out at his boss, punches his best friend, who’s been having an affair with his girlfriend, and shoots a lot of people to let out his rage). While people criticize a film such as Kubrick’s ‘A Clockwork Orange’, I fail to see how this is any better – to me, it is far more objectionable and potentially damaging in its effects that Kubrick’s film. ‘Orange’ was disturbing intentionally, and though ambiguous in its attitudes to the gang of thugs, at least such ambiguity made the viewer think. ‘Wanted’ is not intended to be disturbing, or to make the viewer think – and, considering the subject matter, that is what makes it all the more troubling.

Returning to those final lines, then - by “taking back control of my life” (which is presumably supposed to be an admirable thing – sounds like it comes from a self-help manual), what is really meant is a form of macho self-assertion through violence. Huzzah. 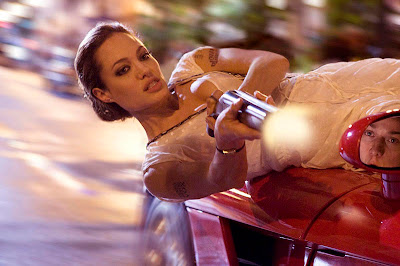 So far, I’ve only talked about one character. Let’s move on to the others, then: Angelina Jolie is there primarily to pout and wear leather jackets, though at least there’s no love interest with McAvoy, and she is shown as strong and resourceful (in a nice role reversal, it’s McAvoy who spends the duration of a car chase screaming his head off, while she’s the one who takes control). Morgan Freeman is there to do very little (nowadays, it seems that he doesn’t really have to act at all – he can just turn up in any film and automatically lend an air of wisdom, gravitas, dignity, etc). I was mildly amused when they attempted to depart from his image a little bit, as he spouted some Samuel L. Jackson-style lines (in other words, using the word ‘f*ck’ once or twice). Even Terence Stamp turns up at some point to fill in a few plot gaps.

Interesting issues are raised in the idea of the portentously-named ‘Loom of Fate’, which for a moment leads one to suspect that a Matrix-style philosophical fantasy is about to unfold (though in the end it’s all dealt with rather inconclusively and incoherently). Elsewhere, the screenplay is often unbelievably cheesy. Characterization here is an absolute no-no – not even in the elaborate cartoon sense of the ‘Kill Bill’ assassin back-stories (the one attempt at back-story here (Jolie’s) peters out almost as soon as it began). There’s a complete lack of emotional identification, or the creation of any emotion at all, besides a delight in all the chaos unfolding. The script-writers seem just not to have cared, even stealing the Star Wars idea of the central character seeking to avenge a father’s death, only for the villain to reveal, “No, I am your father.” Ouch!

Perhaps that’s inevitable in a movie based on a comic-strip. Maybe they should have just left out dialogue altogether and concentrated on what really mattered – the special effects – for, as Roger Ebert points out in his review of the film, there are probably only 10 or 15 shots in the entire movie which do not rely on these. How long is it before the latest blockbuster is just two hours of gunfire, explosions and carnage, with no plot to give it even a tenuous reason for existing? 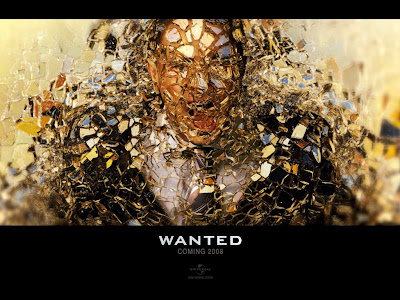