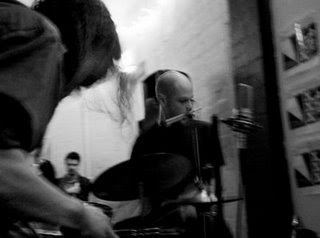 Live at the Portland Arms, Cambridge
17th February 2009
According to Nietzsche, we are "fools for rhythm." Is that such a bad thing? The Flower-Corsano Duo are all about that relentless rhythmic surge, that urge to pound and strike a drum-kit until it gives off a million sharded beams of hard light, a near-mystical beam with an aura enhanced by twanging plucked scales. It’s a beam that emerges with such clarity only out of a sheer single-mindedness, as opposed to diffuse hippy mysticism, messing around with weirdness. These guys know what they are doing, and do it – they go straight for the peaks, even if, on this occasion, it took a while to get going (this was by no means the best Flower-Corsano performance I’ve heard).
I hate to say it, but it’s hard not to avoid terminology like ‘consciousness altering’. This music offers an alternative of some sort, to the packaged and the satisfied. In its desire to always maintain that state of yearning on which its power to move the body and mind is based, this music refuses a satisfaction and a comfort with ‘how things are’ – the desire to prolong that sheer enhanced experience is inherently a desire that acts against the diurnal jackboot tread, or what poet Sean Bonney calls “that shameful but essentially boring public murder.” And yet I'd hesitate to make this too political – not only because I know nothing of Chris Corsano and Mike Flower’s political views, but because what they create too is a commodity, aimed at a particular crowd. They provide a vaguely 'spiritual' experience for an ‘experimental’ scene which doesn't believe in the spiritual but wants to get those same kicks in a ‘justified’ left-field setting.
That’s the too-cynical reduction; swing to the other extreme, and they offer a hope of some sort, or a burning desire; or, hell, I like it anyway, even if its ‘spirituality’ is actually just constant rise to climax (masturbatory or coupling, take your pick), even if all it is is repetition to orgasm and serene aftermath of that jerking trance.
And fuck the sexual analogies, it must be said that Corsano is an excellent drummer. Some drummers play something for a while, then stop and move on because it's too much effort, but he can stay in the zone, in the pocket, stopping only when the music dictates a new tack; his arms moving at pummelling speed, his dexterity is that of a boxer as he consistently rains down blows on his kit, plays very loud and very fast. It's not polyrhythmic complexity so much as single-minded determination and drive, building to the inexorable bodily mysticism that the duo pull off so well: a hard-hitting prayer, a religious punch to the gut.

The structure is not so much about note choice but about the creation of a continuous sound stream which retains its interest through a control of dynamics which is actually quite subtle. Ebb and flow, ebb and flow. Both Corsano and Flower vary the loudness in a manner that could be quite instructive for certain bands ‘on the scene’. Flower’s ‘Japan Banjo’ is laid horizontal on an ironing board, of all things; his somewhat decrepit face hidden by straggly hair, his jeaned legs kicking it to ecstasy shudder, his quivering body and bobbing head in electric shock at the electricity of his performance and of his own electric instrument.

The sincerity embodied in that drugged-up trance (where music is, as far as I can tell, the only drug, at that particular point in time) – that sincerity is a belief in sound or 'vibrations' as Albert Ayler would have it. And that doesn't seem like a hippy catchword when one senses the drum-pound tremble the floor slightly, undulation/ underlation, over and over, constant motion. It's waves, ebbs and flows; it's mostly that inexorable rhythm lull, some ex-hippy's eastern-tinged vision in a temple where they all take pot; though it emerges from and back into drone sunrises, a sitar-sounding drone which must have been playing throughout the performance but which one only notices when Corsano calls it a day and Flower switches off his amp. “Go take a crap” advises the bald wunderkind as he lays aside his drum-sticks, and that’s not bad advice; for all that talk of ‘spirituality’, for all that element to the experience Flower/Corsano offer, you’re yet shuddered into an instructive awareness of your own body that might make you value that dump you take as more than an unclean thing evaded in a quest for clean perfection. This is a messy mysticism, the dirtied but still utterly valuable legacy of some kind of psychedelic hippiedom that never really existed in the 60s when that sort of thing was most conceivable; but it exists now, beats into broken dreams its brilliancy.
Posted by david_grundy at 2/18/2009 01:40:00 am No comments: