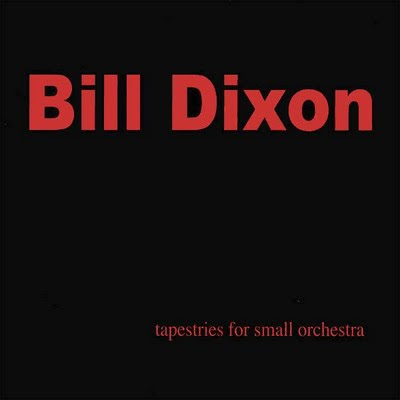 As Stephen Haynes notes in his online journal/blog on the recording sessions for this project, one of the challenges involved was providing enough distinction in the sound mix between five trumpeters/cornet players with similarly dark sounds. But Dixon does, after all, favour a dark palette, as amply demonstrated by his previous orchestral release, ‘17 Musicians In Search of a Sound: Darfur’, where the slightly larger ensemble produced slowly emerging chord-clouds and slowly shifting unison passages in which the ensemble mesh was produced by individual instruments in near, but not quite, total alignment. The effect is a kind of blurring, produced by a very careful manipulation of individual detail; a more horizontal than vertical approach, with solos emerging as parts of the texture – like a colour highlighted in a particular portion of a canvas – rather than as monologues supported by an ensemble background. This has always been the case with Dixon’s own playing, particularly given his use of electronics, and the fact that the other trumpeters also deploy electronics, in some cases seeming to mimic his approach – muted growls, breathy whispers, repeated mid-register notes, high-pitched flurries cascading into silence – adds to the collaborative feel. That’s not to say that there aren’t solo spots, though – for instance, ‘Motorcycle ‘66’ starts with melodic material for unaccompanied bass which succeeds in forcing an initial concentration, in ushering the listener in to a music which needs to be heard with open ears. In any case, neither ensemble nor solo passages contain a wasted note; as Dixon puts it: “Listen to the space in the room. If you can't do something more beautiful than that, shut the fuck up.” The result is a kind of substantial minimalism – very slow, seeming to lack any overtly linear development, predominantly atmospheric, almost trance-like. And yet even this apparent lack of activity – most pronounced on the sustained hush of ‘Adagio: Slow Mauve Scribblings’ – reveals itself upon closer inspection to consist of complex structural balances and connections. Low, slowly-shifting drones, shimmering vibraphone, occasional electronic tweaks, overlapping melodic lines, repeated upward flurries all combine to create a sound field that is unique in modern music. Inexorable yet fragile, ‘Tapestries for Small Orchestra’ is slow-moving, meditative, and deeply affecting.
Posted by david_grundy at 12/08/2009 05:21:00 pm No comments: