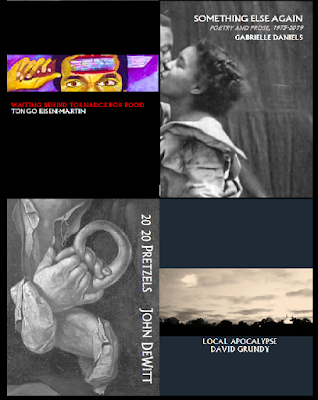 Gabrielle Daniels, Something Else Again: Poetry and Prose, 1975-2019

“Daniels’ talents spin in every conceivable direction. Her writing continues to investigate and illumine corners of the world often neglected by the white capitalistic structures of patriarchy that shapes our lives from birth to death. Daniels’ work reveals a history, a legacy, a plan of action for the future. These are stories and poems with the punch of a novel in miniature.”      (Dodie Bellamy and Kevin Killian)

“I am trying to figure out the ruling class. How they raise their replacements...”

“Can I have a water?
And and or or
A bowl of oceanic feelings bungled and split?”

Also: reviews of Jacques Coursil's posthumous Hostipality Suite from Savvy Contemporary and of a Sun Ra re-issue at Bill Shoemaker's Point of Departure. 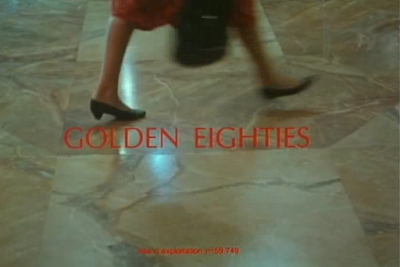 'Golden Eighties' is a far cry, formally and thematically, from Akerman's films of the ’70s and early ’80s—the rigorous studies, influenced by structuralist film, of domestic environment and gendered power dynamics in 'Jeanne Dielman' (1975); such dynamics as transposed onto loneliness, travel and connection in 'Les Rendez-Vous d'Anna' (1978); or the atomisation and anatomisation of the trope of lover's partings in 'Tout une Nuit' (1982). Instead, this is a bona fide musical, set entirely in a shopping mall, with its vibrant colours, choreographed tightness, and tendency to burst into song every few minutes undeniably close to the sentimentalist cinema of Jacques Demy which might previously have seemed the antithesis to Akerman's cinematic rigour. And though its 1980s pop-aesthetics are closer to Demy’s Orphic flop ‘Parking’, released the previous year, it’s with Demy's best-known films, 'Les Parapluies de Cherbourg' and 'Les Demoiselles de Rochefort', that it shares concerns with romantic coincidence, reappearance, the chance meeting or missed opportunity, the balance between an idealised lost or distance love (idealised because lost or distant) and the pragmatic compromise associated with longevity, with building a career, with petit-bourgeois stability.
The plot's best enjoyed in its unfolding, rather than in drab summary: but briefly—Robert, son of cloth store owners, is in love with Lili, who runs the salon directly opposite, gifted to her by the married Mr. Jean, corrupt owner of mall property with a reputation as a gangster, and head-over-heels in love with her. His parents wish to take over the salon and turn it into an additional store, and Robert's desire gets in the way of their plans; meanwhile, Mado, an employee at the salon, shares a passion of her own for Robert. Into the mall steps an expat American—the long-lost lover of Robert's mother (played, in one of her final roles, by Delphine Seyrig), who nursed her back to health after she'd escaped the death camps (Akerman's concern with the genocidal traumas of European history figures even here), leaving her a dilemma of her own. Various pairings, proposals and betrayals later—along with plenty of generally brief songs, generally sung in chorus rather than as solo vehicles—Mr. Jean destroys Lili's store in a fit of jealous rage, Robert's parents get their desired expansion into the vacant property, his mother decides for longevity and security over the promise of revived romance, Robert himself decides to become a model capitalist, and all ends in a curious mixture of happiness, unhappiness and compromise that's given the feel, more than the content, of resolution.
Of the relatively little written on the film, reviewers seem to assume that Akerman must have distrusted or disliked the musical form as an inherently fallacious form—the epitome of Hollywood falsity. That hardly seems to be borne out by Akerman's own statements or by the film itself. After all, through much of her work runs that interplay between America and Francophone Europe, the historical traumas of European Jewishness and their parallels in American immigrant experience, of Cold war political experience in the shadow of American world power either side of the Atlantic. (‘Letters from Home’ would be exemplary here.) And, just as the Nouvelle Vague in the 1960s learned from the kitsch genre pleasures of Hollywood, including the musical—and not just in ‘Une Femme est Une Femme’—so the Americanisation of popular culture, the rise of consumerism, the effects on petit bourgeois character and the fracturing of class solidarity are unavoidable concerns in the cinema of succeeding decades, in a mixture of aesthetic pleasure and political critique. Akerman’s film offers, for sure, a criticism of the propaganda of fulfilment through commerce, patriarchy and romance narrative associated with a generalised sense of the American musical, but Akerman clearly loves the form, the material in itself. It’s pretty much a truism—but one that seems to pass a number of viewers by—that one can work with, and critique, cliche and generic trappings/entrapments, whilst loving its forms, the joys and freedoms it affords. After all, the fixed camera and stark structural exercises of Akerman's early films are just as much 'artificial' affects as the elaborate choreography of the musical. In fact, what for Akerman retrospectively disappointed her about the finished film were not its populist aspects, but the limitations placed on the film's scope—that she was not afforded the lavish canvas—particularly the spatial dimension—of bigger-budget musicals, and that what transpired is, in effect, a kind of chamber version, the piano reduction rather than the full score, as it were. Yet, though ambitions for the film were compromised by the circumstances of production—a confined set, limited crew, chamber ensemble rather than full orchestra, and so on—the finished product makes of these its material, rather than these simply being the material of which it is made. This is, after all, a film which doesn't leave the confines of a shopping mall—indeed, doesn't leave a particular corner of the mall, surrounding the clothing store, the salon and the bar (with a brief excursion to the cinema as a kind of sneaking into the forbidden—the world, both of illicit trysts based on past longing and on the encroachments and thrills of the American sci-fi blockbuster). In the very final scene, where the characters emerge blinking into the sunlight, we realise with a shock that it's the middle of the day, and there's a world outside. 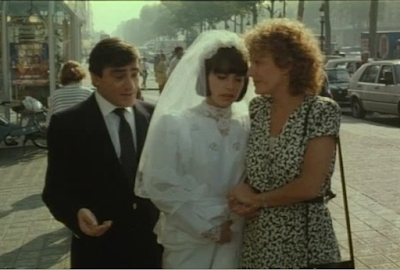 And so the film pivots on the arrangement of lavish collective movement within a confined space—the perpetual motion of dance and movement as expression of choreographed spontaneity, restricted freedom—turning it into a kind of allegory for its entire operation: from the opening shots of stilettos moving across a floor to their echo in the scenes of illicit lovers caught in the act, feet visible beneath changing room curtains, and then to the filming of entire bodies, perpetually alone or jostling, connecting, touching, then moving away, all within the confines of a small set that functions like a kind of expanded version of the domestic interiors of 'Jeanne Dielman' or the lesser-known, comedic 'L'Homme a la Valise'. Instead of static shots, there are quick cuts from person to person, a camera swooping to contain moving chorus lines, the frame filled almost to bursting with all-singing, all-dancing employees; central characters either get caught away in the crowd, shouting or singing their lines to each other while being jostled apart, or bemoan the empty space, devoid of customers in a time of recession. This focus on the collective suggests the camaraderie and survival enacted within spaces of labour—the bored employees of the salon who produce joy and solidarity out of their surroundings—along with the judginess, gossip and cynicism that are their companions. The pairings of the couple offset, are commented on, and are the horizon for the film’s sociality—a sociality produced by and within spaces of consumerism, the de-materialised world of service industries that are reliant on changing trends in fashion, consumption and national economic ‘health’. ‘Individuals’ never really make it, or matter, here; any lover can be exchanged for any other lover, love the mechanism which goes beyond individuals yet motivates and circumscribes their every move—like the economy, like the weather which suddenly intrudes into this artificially sunless world in the ‘it’s raining’ dance number, as businessmen temporarily take shelter in the mall, their coats dripping water from the outside. And it’s this sense of love’s economy—exacerbated in the cynical speeches of Robert’s petit-bourgeois father, whose gospel is ‘expand, expand’, but who is equally concerned with the values of conservation, prudence, investment, stability and the like—that governs much of the film. These references to the economic crisis gradually build up as the film reaches its conclusion; Robert, the aimless romantic ('Romeo of the trousers', as the film's barbershop-quartet chorus put it, perpetually lounging at the bar) spouts the ethic of self-help, business practice, efficiency and competition ('expand, expand') learned from his father in parodically sped-up tele-prompter speak; his father deploys a cynical metaphor of investment in love vs. the risks of passion while commiserating with the bride Robert has jilted; the beauty salon owned by a corrupt businessman as a pad for his lover is smashed up by said owner, who gets to trash the entire store, firing a gun, and seemingly escape any kind of legal consequences—later parading into the mall displaying his wife and daughters as so much property, indices of power and of hypocritical respectability. 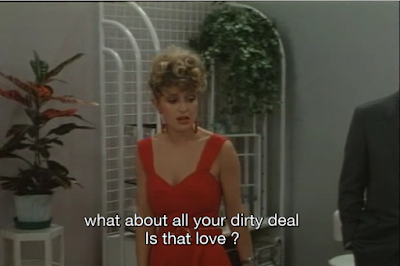 Does this make the economic recession—and the allusions to the power of American global capital, investment and consumer patterns—the 'background' to the musical narrative, with its fast-moving plots and sub-plots, or is that musical the allegorical expression of it? In a sense, it's the same question as to the role of the Algerian war in Demy's ‘Les Parapluies’, but whereas the war there functions as absence, lacuna, the experience that can't be expressed, here recession and the language of economics, planning, 'expansion' and the like unavoidably maps onto the (gendered) nature of love, even as it's perfectly possible to watch and enjoy the whole film for its surface pleasures—movement, orchestration (ambient mall sounds like hairdryers, footsteps and the sounds of keys in locks mimicked and incorporated into music and sound design), studies in group dynamics, lyrical rhymes alternately biting and bittersweet. As in any of Akerman's films, that distinction between foreground and background, individual and collectively social (whether or not the latter is directly visible), subject and surrounding, is precisely the division she'd seek to question; here, dancing through and over those spaces in flights of constrained fancy, fanciful constraint. What should be stressed above all—it's a joy to watch.
Posted by david_grundy at 12/12/2020 02:27:00 pm No comments: