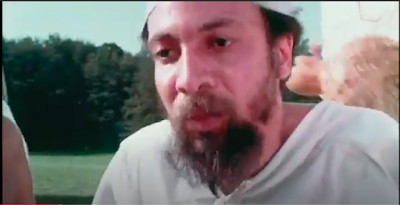 Here is the late Milford Graves, very briefly glimpsed as part of the percussion ensemble in the 1975 film Lord Shango. The film stars Marlene Clark of Ganja and Hess fame--here offering some of the best eye-widening expressions in cinema--and was marketed as a horror movie, though it might better be described as a drama with supernatural elements. Written by playwright Paul Carter Harrison--who also scripted Youngbood (1978) and an un-produced biopic of Sam Cooke--and shot in Friendsville, Tennessee, it concerns the clash of Yoruba and Christian religion, centring around the idea of sacrifice, spirit possession, and the relation of the living to the dead. In some senses an allegory for the suppression of a non-Christian past, it opens as a group of Christian congregants violently drown the Yoruba practitioner who tries to interrupt the baptism of his partner, who, along with her mother (Clark) seeks answers within the Yoruba ceremonies in which he participated. Guilt, revenge (of a kind), and the ambiguous presence of the town's resident alcoholic align with possession by the deity Shango, a convoluted marriage plot with vague echoes of the Southern Gothic, and various other plot twists it's sometimes hard to exactly pin down.

Like Ganja and Hess--on which Harrison explicitly modelled the film--Lord Shango doesn't really fit any of the generic categories placed on Black cinema of the time--horror, Blaxploitation, drama--though it perhaps includes elements of all of these. And while it lacks the sheer surreal, a-narrative strangeness of Ganja--the pacing is more sedate and telegraphed--it's certainly distinctive. As might be expected, the film's character is a response to circumstances, and this perhaps explains its refusal to settle into any one type of film--in some ways both a strength and a weakness. A better sense of this can be gained from Nicholas Foster's interesting article on the film's production history and evasion of categories for Black cinema here. Consciously seeking not to be a Blaxploitation genre piece--"the days of Blaxploitation are over" ran a newspaper report on its production--the film was a coproduction between the Ronald Hobbs Literary Agency, who represented Amiri Baraka, Larry Neal and other Black Arts Movement figures, and distribution company Bryanston Pictures who'd also put out Andy Warhol's Dracula, Andy Warhol's Frankenstein, and The Texas Chainsaw Massacre and later, Deep Throat (obscenity charges surrounding the latter leading to the company's collapse), with Hobbs apparently inviting the likes of Baraka, Neal and Adrienne Kennedy to evaluate the film at screenings.

This in part suggests an attempt to break out of the stereotypical generic framings which, by the mid-70s, had constrained not only depictions of Black lives but the choices available to Black filmmakers, looking instead to the world of theatre, where a break with both the form and content of a white-dominated artistic apparatus had been broached. And Baraka's own experiments as a filmmaker--from documentation of political activism in Black Spring to unproduced scripts for an animated Blaxploitation parody called Supercoon and the surreal meditation/polemic The Death of Malcolm X--certainly suggest the possibility of an alternative trajectory. Yet the presence of Bryanston--operating at the intersection between the 'arthouse' underground and exploitation movies per se--might also suggest a kind of construction-by-committee--the film remaining caught in the commercial imperatives it also attempts to escape. (After all, this was a time when a major publishing house thought that a new book by Baraka would tap into the same market as Mario Puzo's The Godfather!)

And ultimately, the potential of Harrison's script often feels hemmed in, rather than opened out, by its filmic treatment. Director Ray Marsh made a few other shlock films with titles like Suburban Commando and Forbidden Love, and is never even mentioned in Harrison's reminiscence at Black Camera. While the auterist model is problematic in itself, we might note here that Gunn's Ganja and Hess is very much an auteur film--written by and co-starring Gunn, with Gunn's distinctive editing, the removal of exposition and backstory for the distinctive dream-like atmosphere, radically transforming the material at hand, as indicated by the batch of deleted scenes viewable here, nearly all of which are conventional exposition scenes that would have vastly clarified much of the film's otherwise obscured plot. Lord Shango is a different story. Gunn's film comes alive (or undead) both in its camerawork and its editing: its zooms and slow-motion pans, accompanied by a non-linear soundtrack in an effect at once delirious and ritualistically slow, as if the camera itself were a dancing, malevolent presence rather than merely an observer or frame. Marsh's camera angles, by contrast, are generally static medium shots, placed in juxtaposition that builds narrative momentum and suspense by numbers. The central Yoruba-Christian conflict is illustrated, not only in the script, but with an obvious and hackneyed cutting between different settings and incidents that ends up killing, rather than creating, any tension. In Gunn, that absence of tension (which is different to dread) is precisely the point: the reinvention of horror not so much as suspense or shock as a kind of endless, feverish, waking dream--the nightmare of history itself. While Harrison's script might also have lent itself to that kind of reinvention, however, Marsh's handling aims to reinforce zones of conflict and contrast rather than to blur them, to go deeper into their inter-animation. The opening scene, in which church-goers either deliberately or accidentally drown a Yoruba devotee who interrupts a Christian Baptism, should be resonant and tense. Instead, it's near-plodding, desperately crying out either for longer, more patient atmosphere-building or some severe editing, even with Graves' insistent percussion on the soundtrack. Sometimes it feels like we're watching the idea for a film rather than the film itself.

Yet the film's soundtrack--or the idea behind it--is a fascinating attempt to illustrate its central conflicts. Composer Howard A. Roberts--music director for Alvin Ailey and Harry Belafonte among others--scored the film: his choir provide spirituals to illustrate the Christian side, while Graves, who served as African percussion consultant, illustrates the Yoruba side alongside a group of unnamed percussion players. The film as a whole may fail to integrate its sonic experimentation, and its ideas in generally are little more than half-realized. Nonetheless, like the brief footage of Graves at his prime, to the side of his action but still magnetic, the film provides rich ground for speculation: grounds for the alternative history of a mode of Black cinema in America, operating at the tricky nexus between commercial imperative and artistic-political interrogation, that might have been.