Time Jumping Over Itself: Roscoe Mitchell in London, June 2022 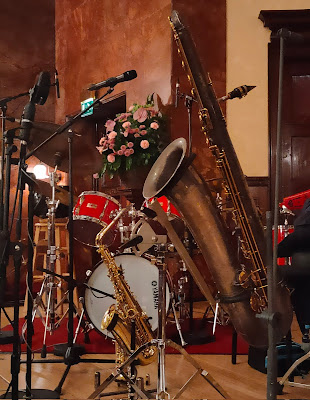 Wigmore Hall, 28th June 2022
Roscoe Mitchell: saxophones
Simon Sieger: trombone, tuba
Kikanju Baku: percussion
Dudu Kouate: percussion
No-one does abrasiveness quite like Roscoe Mitchell: his tone, on numerous saxophones, sharp and sour, each note sounded out into space like a rock dropped in water, his approach to form bordering on the ascetic, a calculated restraint, in which the space between the notes is, as the familiar adage goes, as important as what’s played around those spaces. For this concert at the Wigmore Hall, the 81-year-old Mitchell, on alto, bass, and curved soprano saxophones, along with a rogue piccolo, was joined by Marseilles-based Simon Sieger, on trombone and a giant borrowed orchestral tuba, and two percussionists, Kikanju Baku and Dudu Kouate. An unusual set-up which balanced the chamber music timbres of his composed, new music works with the structural openness of Mitchell’s improvised work, the range of registers allowed by the array of horns allowing an expansive play between high and low sounds, encouraged by the Wigmore’s excellent, chamber music acoustics.

Played over two long sets, this is music of intense focus. It begins with Sieger’s throat singing and Mitchell blowing some spare notes on curved soprano saxophone. “Time to move on, perhaps”, Mitchell suggests, and Sieger, picking up the trombone, sits there holding it in silence for some minutes. Much of the contribution the musicians make is about listening: we’re beyond the logic of the solo and the showcase, into the world of sound and silence. As the percussionists set up a transparent wall of sound, Mitchell leans forward into the bass sax—an instrument so big he has to play it sitting down—and blows a single note. He sits back and folds his arms, eyes closed, listening. A pause, and then another note. He sits back once more. The enigmatic space between enigmatic notes erases linearity while forcing us to listen for linearity all the more. The notes form a kind of dispersed melody, each one an entity, a world or even an entire piece in itself, yet also part of a structure that could, potentially, extend infinitely. This is Mitchell’s gnomic method in a nutshell: his tone sharply precise and yet woozily loose; the structure intensely focused and open to any direction, within a self-limiting set of confines.

By contrast, the two percussionists provide a veritable forest of sounds and textures. On one side of the stage, Kikanju Baku leans over a drum kit with expanded gongs, bells, and wooden and plastic cowbells; on the other, Dudu Kouate deploys a whole array of sound-making devices, from a giant gourd filled with water to cymbals and gongs, flutes, a thunder-maker, and bowed crotales. Sometimes sitting, sometimes standing, Kouate in particular draws the audience in like a magnet. At one point, he starts swinging a pink whirly-tube—more officially known as a corrugaphone—over his head, narrowly missing the Wigmore’s vase of plants and the top of Sieger’s tuba, and setting in motion the aethereal strains of the harmonic series. At another, he submerges flutes attached to plastic bottles in the water-filled gourd so that they’re played by the water itself. None of this, however, feels like showmanship: Kouate’s playing throughout is characterised by a profoundly melodic sense, whether varying the pitch on a drumhead to play counterpoint with Sieger’s horns, or in dialogue across the stage with his fellow percussionist.

During the second set, Mitchell finishes an alto excursion to be met by a single audience member’s vigorous applause: weathering the interruption, he follows up with a piccolo solo that touches on the repertory associations of the solo ‘classical’ flute repertory yet ends up—and starts from—somewhere entirely different. He puts it down, never to take it up again. The music is like that: discrete moments, self-contained, yet bleeding into each other with cumulative intensity. It’s not about narrative, momentum, or progress, though some of the most effective moments contrast Mitchell and Sieger’s slow, fractured melodic counterpart with regular percussion rhythms, paradiddles and polyrhythms, a kind of elongated procession, pausing for thought along the way. Time’s doesn’t so much stand still as jump over itself in somersaults.

In rehearsal, Sieger notes afterwards, the band spend hours playing scales, and Mitchell duly plays a major scale to close the first set. In the second, I swear I hear him perform a kind of cubist reconstruction of ‘Twinkle, Twinkle, Little Star’. These moments—a kind of refractive woodshedding, at once private and instantly accessible—seem to lie behind Mitchell’s playing even at its most rhythmically-staggered and tart. Strangely familiar or familiarly strange, they echo the kinds of playing you do when you’re starting out, or the singing you might do to yourself at quiet moments—a point of access at a point of privacy, a threshold over which to enter the music. There’s humour here, and what I would go so far as to call love: a love that manifests in listening, in attentiveness, in a sharing no less meaningful for its sometimes thorny difficulty, and perhaps all the more so. And then, suddenly, Mitchell and Sieger launch into the Art Ensemble’s familiar theme tune, ‘Odwalla’, as he calls out the names of the band members. In the row in front of me sit a father and three teenage sons. Throughout, they’ve been totally with the music, even at its most abstract points. As they hear ‘Odwalla’, they nod their heads in knowing acknowledgment. Coming back to its roots for replenishment, this conclusion, as ever, is only temporary: renewal and resting point, only the latest stage in the ongoing journey.
Posted by david_grundy at 8/05/2022 06:09:00 pm