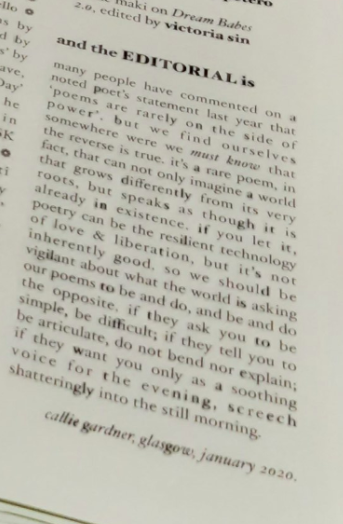 The poet Callie Gardner passed away in early July. Callie was author of the book-length naturally it is not., a series of four letters published by the 87 Press a couple of years ago, each one corresponding to one of the seasons. Committed to the kind of work that can be done in a long poem, in this book they construct a kind of essay in verse whose formal structures--a digressive but focused articulation of unfolding argument--shares something with elements of L=A=N=G=U=A=G=E poetry, particularly Lyn Hejinian, something with Ashbery's longer poems, but is always shot through with a particular and distinctive relation to language, a wry and sardonic yet loving sense of humour, and an urgent concern with how to move through 'nature' and the weather, social constructs whose mythic mismanagement hurtles us toward destruction. For me, some of the sections that resonate most are the pastoral observations of flora and fauna written "from my summerisles"--even as the introduction makes clear that comforting reifications of 'nature' are the sequence's prime target of critique. There's a grace and a beauty of observation, an incisiveness that is a form of clear-eyed attentiveness and love.

Callie was also author of numerous magazine publications— a scholar of the work of Roland Barthes, Veronica Forrest-Thomson and others—and a devoted and selfless champion of small press publishing, with Zarf magazine and Zarf editions. Given the labour of editing and of maintaining a regular publication schedule amidst precarious labour on the edges of the academy, and elsewhere, that so many poets in the scene have to perform, it's hard for print magazines to be sustained in the UK small press scene—they tend to last sporadically and then fade out. But Callie produced 15 issues of Zarf between 2015 and 2020, ending as the pandemic hit, each one with an editorial that offered a poetics in miniature. Here's the editorial from January 2020 (also pictured at the top of the post):

many people have commented on a noted poet's statement last year that 'poems are rarely on the side of power', but we find ourselves somewhere w[h]ere we must know that the reverse is true. it's a rare poem, in fact, that can not only imagine a world that grows differently from its very roots, but speaks as thought it is already in existence. if you let it, poetry can be the resilient technology of love & liberation, but it's not inherently good. so we should be vigilant about what the world is asking our poems to be and do, and be and do the opposite. if they ask you to be simple, be difficult; if they tell you to be articulate, do not bend nor explain; if they want you only as a soothing voice for the evening, screech shatteringly into the still morning.

Others are far more qualified to talk about this, but to me it seemed that Callie’s work as editor and as poet always manifested this great generosity and dedication: they offered incisive readings of the systems we live under and have to live through, academic and others, but they also exemplified the power of kindness, of taking poetry seriously and taking the communities that develop around it seriously, of maintaining this total commitment to alternative ways of being and organising and living. A recent series of commentaries on contemporary poetry--Nat Raha, Eric Hunt, Rennee Gladman, Tom Betteridge, and others--sought to find a form of writing that would be adequate to the works themselves, neither academic nor sloppily journalistic, but immanent and urgent as Callie felt those works to be. Constructed, like naturally, it is not., as a series of letters, the dialogic nature of these pieces--relaxed, focused, concerned with the mechanics of reading and the inner workings of a poem on the inner workings of its readers, manifest a gentle and exemplary seriousness about reading the work of often obscure contemporary poets in these communities that some of us find ourselves in--communities subject to dispersion, fragmentation and precarity, that have become all the more dispersed during the past year-plus of pandemic. They're models for how we might do criticism, for how we might read, for how we might conceive poetry in our lives. It's the kind of writing that gives you the strength to keep going, writing, reading: a gift.

Callie’s loss, far too young, is that latest blow in what's been an exceptionally grim couple of years. The world needs more people like this, not less, and they will be much missed.

Recently I participated (online) in the Milosz Festival, Krakow, discussing UK poetry and politics in a conversation with Harry Josephine Giles and Luke Roberts at the kind invitation of Marta Koronkiewicz and Paweł Kaczmarski (who host the discussion). The discussion can be viewed here (you'll have to sign up first). 'Occupied Territory and Abolitionist Freeze Frames', an essay on Haile Gerima's Bush Mama, is in the new issue of Senses of Cinema.

And again in Bush Mama – outside the prison per se, but in the carceral circuits that surround it – Dorothy fights back. Gerima’s response to being stopped and searched while filming was to include the footage in his film. Someone was filming. Someone witnessed and documented. This is the beginning of community, of resisting the occupying army. For Gerima, following the theorisations of Fernando Solanas and other Third Cinema pioneers, the film camera was a weapon, a tool in the struggle. But unlike a gun, a film does not run out of ammunition. The camera witnesses and records, but also transforms reality. Cinema itself is, in essence, the projection of still images to create the illusion of movement. A frozen image can be made to move. The cell awaits smashing. Bush Mama’s final freeze frame awaits reactivation. 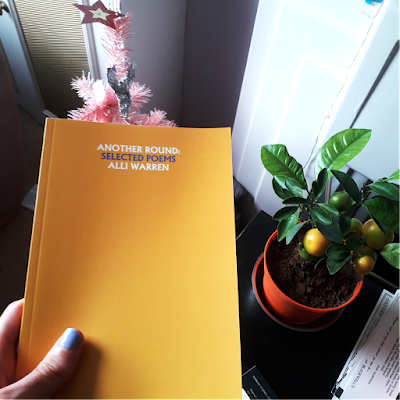 New from Materials, Alli Warren's Another Round: Selected Poems. This is Warren's first UK publication and is available here. Here's the official write-up:

Dear Comrades
don’t get it twisted

This Selected Poems, Alli Warren’s first UK collection, presents work from her first three full-length books: Here Come The Warm Jets (2013), I Love It Though (2017), and Little Hill (2020). Shot through with clear-sighted hope, yet intensely attentive to the specific cruelties of our present epoch, Warren asks “who is permitted unhindered breath”. This work aims to “study the past to denaturalize the present”, to reverse the mirrored and self-perpetuating notions of nature and culture, human and animal. Warren knows that poetry can’t sing from beyond mediation, but insists that poetry can acknowledge mediation’s more mendacious disguises and bring them out into the open. Carried through by a prosody alternately razor-sharp and capaciously crowded, in lines and sentences harshly yet lovingly aware of the “possible future in the tender measure”, poet-as-ventriloquist throws multiple voices to see what’s revealed under poetry’s light. With glamour and imagination and biting humour in abundance, Warren seeks to walk to the end of the world-system, “the terror of the totally plausible future” at once post-apocalyptic and utopian—“When I said I was going / to the bar I meant / no death, no death”. Such work may “begin from economic fact”, but it’s where you go from there that matters. Operating within the flows and constraints of racialised capitalism—a space of horror, shared with monsters—Warren’s poetry also throws up multiple pleasures, guilty and otherwise, and glimmers of collective possibility, of possible futures we can sometimes glimpse and live within. This is poetry written from community, poetic and otherwise, living and dead and otherwise: from Oakland, El Cerrito, San Francisco; from the meadow, from the street, in a car; marching to shut down the port, walking to breathe in a charged air everyday and Orphic, “buoyant” and “forked”. These poems give us the measures, the strength, the breath to propel ourselves through the circumscribed day.

ALLI WARREN is the author of Here Come The Warm Jets (City Lights, 2013), I Love It Though (Nighboat, 2017), Little Hill (City Lights, 2020), and numerous chapbooks. She edited the literary magazine Dreamboat, co-curated the (New) Reading Series at 21 Grand, and co-edited the Poetic Labor Project. She has lived and worked in the Bay Area since 2005.

Finally, I have some copies of 'Umbra magazine (1963-1974) An Introduction and Bibliography', the fifteenth pamphlet from the University of Buffalo's Among the Neighbors bibliography series. The 40 page pamphlet consists of a timeline and a short essay, along with a bibliography of the five issues of Umbra magazine. If you'd like one, just leave a comment below this post with your email address.