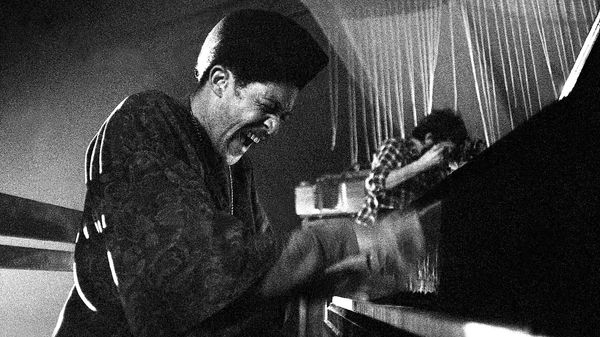 Bobby Few's piano sounded like the ocean; it sounded like the wind; on the 1979 recording of 'Continental Jazz Express', complete with well-integrated sound effects--whistles, clanks, full steam ahead--it sounded like that most classic of all jazz and blues figurations, the train, Few's thickly chordal, sustain-pedal-borne blurs of sound riding that railroad, under- and over-ground. Few's style was ecstatic, gospel-tinged--a perfect fit on Ayler's last two studio albums (Few had known Ayler since high school), where Few takes the stately church stylings of Cal Cobbs one notch further--and as liable to dreamy or jubilant melody as to the vast waves of sound that filled up the heavenly outer reaches of Frank Wright and Noah Howard's Church Number Nine and Space Dimension. Few was one of the small but robust group of exiles from the free generation who relocated to Paris in the late 1960s, having emerged in the Cleveland-New York energy music axis--Wright, Howard, Muhammad Ali, Sunny Murray, Alan Silva--in all of whose music there existed an equal impulse to create the most 'out', noisy, ecstatic free jazz on earth (Silva's Celestrial Communication Orchestra, with whom Few sometimes played--he's one of the three(!) pianists on the immense Seasons; the various configurations of the Wright-Howard-Silva-Ali nexus) and a fondness for lithe and unusual melody in beautifully apposite arrangement (Murray's Aigu-Grave; Few's numerous records with Steve Lacy--for which, as Lacy put it, he provided "the liquid component in our music"; his later recordings as his leader (Let It Rain can be heard here). Notable too are Few's burningly romantic later collaborations with saxophonists Avram Fefer (Mingus' 'Orange is the Color' here) and Ernest Dawkins, and Sonny Simmons, among others, in which elements of his approach form throughout his career relate more closely to the repertoire and organisation of 'the tradition'. Throughout, Few's was a popular or populist free jazz, marked by the vernacular sounds of blues, gospel, R&B and a joyful tendency to song--like late period Ayler, Wright and Few both recorded as vocalists, the imperfect pitch and wavering cracks of their voices only adding to the music's directness and sincerity.

Stylistically, Few's characteristic figure--a series of descending chords, like someone tumbling down the stairs, at once a signature move and a surprise each time--rendered a sound which was always full of movement--not for nothing does Xavier Prévost name his arpeggios 'torrential'; as one of his track titles has it, Few makes it sound like he's gloriously, exhilaratingly, 'Chasing the Piano'. At the same time, his approach was dominated more by chord than line (and in that sense distinct from the linear adventures of the Bud Powell tradition); you see him deploying both hands for full chordal (or cluster) effect in the photo above. (And the photo in question, taken by Phillipe Gras at the Amougies Festival in 1969, says it all in terms of the energy that drove, informed and was inseparable from that technique.) As an accompanist, Few at once accentuated a harmonic underpinning to even the most 'out' squalls of Frank Wright at full blast and a thick, pedal-reinforced sound that extended into a kind of all-encompassing pan-tonality in which any direction might be taken. It's glorious, and hopeful, and often moving: it's a music of real fervour and hope and bright energy, and this live date by the Center of the World Quartet (Wright, Few, Silva and Ali) exemplifies it as well as anything. Wright's 'Two Birds with One Stone'--a 1978 performance released as a bonus track on the CD re-issue--extends to over twice the length of the version Wright had recorded with George Arvanitas the previous year--here it's at once blissed-out and yearning, the struggle at the heart of happiness, the happiness at the heart of struggle: birds of paradise.

It needed a pianist with force to play with Wright, regarding whom I often think of the story Murray told Dan Warburton about the time in the studio he cranked up a siren to full volume over the band, leading everyone to drop out except "Frank Wright!"--still playing, reaching beyond. When the Center of the World group arrived in Paris, still in the post-May '68 period, as Few tells it, they ran away from a horde of riot police chasing down students burning cars and into what turned out to be a jazz club that offered them an engagement. While teasing out a metaphorical placement for the band vis-a-vis politics based on this evidence alone would be pushing it, the sounds of both tumult and joy sear through the music. This is not a tumult of torment, though--if late period Ayler in particular can sound ghostly, a precarious and terrible fervour, Wright, Few, et al--partly as a result of personality, partly as a result of the idiomatic vocabulary that courses through Few's playing in particular, from stride to R&B, the blues to free--truly produce a joyful noise. The Center of the World Quartet would play for hours--as Pierre Crépon notes, even a 15-minute excerpt hardly does justice to the emotional and formal momentum of the music, its overarching, spontaneous structures, which thrived above all in the expanded temporal setting and charged atmosphere of live performance--and the other musicians in the group--Silva, Wright and Ali, with Noah Howard often supplanting them--forced a kind of single unit. Few's sound, indeed, is so bound up with the vocalic tenor and saxophone-like vocals of Howard and Wright--the cries of "it is time...for the world...to be at peace" on Church Number Nine, the unison melodies of Uhuru Na Umoja or Space Dimension--the vocal interjections and thunderous crashes that rise and fall, ebb and swell of Last Polka in Nancy?, the righteous group improvisations of Unity--that you can't hear one without conjuring up the other.

Steve Lacy rated Few so highly that, the story goes, having heard Few, Wright and others playing at the Amougies festival, he relocated from Rome to Paris in order to play with them--though he would have to wait ten years before Few would join the band. For Lacy, Few was "the first pianist I heard after Cecil Taylor that had his own thing really well developed". Yet Few was also an ideal accompanist (though the word hardly does justice to what he would accomplish in such contexts)--as he would be on dozens of records for Lacy. Whether operating on the 'inside' or the 'outside' of the tradition--or, as the title to one of his earliest recordings, a sideman date with Booker Ervin, has it, 'The In-Between'--Few was intensively responsive, adaptive--an on-the-spot orchestrator of mood, whether following the general tendency or initiating a new direction, whether in a larger group or by himself. Honed by years as a gigging musician, whether in free or straight-ahead contexts, his adaptive responsive appeared able to withstand any interference, any new information, any challenge: legend has it that his first gig at the Duc du Lombard bar in Paris saw someone throw a bottle of whiskey through the window, to which Few responded with some honky-tonk stylings to accentuate the wild-west atmosphere. He could change direction too: listen to the way he takes these down 6 minutes into this outdoor performance with saxophonist Ernest Dawkins after five minutes of bandstand-lifting energetics that draw appreciative cheers from the audience (here). That magic shift--the after-echoes of the peak almost imperceptibly subsiding down into the trough--is one familiar from any number of improvisational contexts, but nothing Few does every feels old; and, paradoxically--but it's not really a paradox at all--celebrating this singular individual musician involves celebrating his capacity for thinking with others as one, of fitting into the group sound, the sound of collective endeavour and response and responsibility that is one of the supreme virtues of this music.

Beyond any album, any performance that he gave with Wright and Howard, and all the work on the Center of the World label (including the superb More or Less Few)--all completely essential--I'm fond too of rare, late items like this radio date with Arthur Doyle (https://www.youtube.com/watch?v=pMTuMxewo4M), or Few's work with multi-instrumentalist Zusaan Kali Fasteau (https://www.youtube.com/watch?v=OnZxlpwQAZQ). Pierre Crépon's typically thorough playlist for The Wire has some other highlights (including the aforementioned version of 'Continental Jazz Express', complete with those sound effects.) On Solos Duets, two tracks featuring Few with Alan Silva pose the question and give the answer, as 'Who Got the Keys?', is followed by 'We have found the Keys': the metaphorical (music beyond a single key signature) supplanting the literal (the single point of entry) in good humour and the ecstatic vision of another world within and beyond this--polytonal, polyrhythmic, multi-levelled, spectacular.