"Airpower coming out of my mouth": Candace Hill 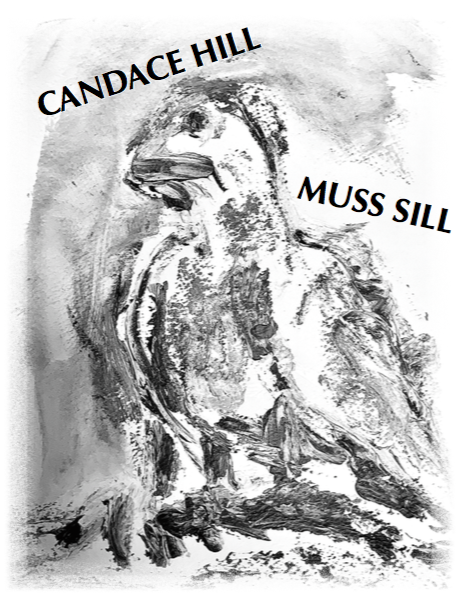 Just out from London-based small press Distance No Object, this 67-page volume has, over the past few days, provided some welcome flickers of light in early August’s pandemicked heatwave. Hill is best known as an artist working in photography, mixed-media collage, and watercolor—her painting ‘The N.Y. Pigeon’ stands as front-cover sentinel. Though she’s previously worked with words as part of images, this is her first collection of stand-alone poems. But it doesn’t easily fit the paradigm of artist’s book, book by artist, studio journal, manifesto. Hill instead more closely resembles—in level of focus, if not the work itself—artist-poets like Etel Adnan, for whom the disciplines of art and poetry are not subsidiary to each other, nor mirror reflections, but equally-weighted paths of investigation. The poems are ‘stand-alone’ in being purely textually based: but they also ‘stand alone’ in their distinctiveness. They’re poems that fit most every definition of ‘unique’, ‘individual’, ‘not like any other’: at the same time, they rarely rest for any authority on the originating or binding consciousness of the mind’s I that spawns their strings of creative association. That’s to say, they sound like nothing but their (multiple) selves. Sometimes ecstatically beside themselves, sometimes in the position of the sardonic observer standing to the side, the poems are clearly the product of a very particular, very individual linguistic consciousness: they reflect a very specific way of seeing, hearing or speaking the world in words that’s unlike other, more familiar ways of seeing, hearing, or speaking the world; that, in the dictionary definition of idiolect, manifests “the speech habits peculiar to a particular person”—a condition after all, that governs the productive tensions of speech itself.

It’s like this: “ ‘She nodded’. Whoever she is. Move the huh huh huh / Huh’s in”. As a whole, the book is a sometimes frenetically overlapping ensemble of shorter pieces, anything from a few lines to a few pages in length, perhaps best appreciated through its parts rather than its sum. After several read-throughs, I’ve found that they have their fullest effect when taken in small doses. Chorically chaotic, a swarm of sounds, impressions, senses, noises, flashing insights, fast and lively, it can be hard to keep up, and zooming in on a few pages at a time helps to elucidate their workings with greater richness. When sampled this way, it’s all the more readily apparent how these poems dance with a slapstick precision; how they fizz with the sheer delight of language, the sonic preponderances that are poetry’s particular unbounded domain; how they zip and pop with a delight in the mysteriously material mechanics of language, spectrally earthy, morphing on the tip of a poised tongue. This is not poetry which will do what you want or expect it to do, but in its quick-linking, jump-cutting double-takes, it whirligigs everything that comes into its path—including that individually generalised figure, ‘the reader’, shaken and delighted by its pun-riven audacity.

For all their individuality, Hill’s poems operate in a tradition of African American experimental poetry—that territory critics like Aldon Nielsen have so painstakingly tried to bring into the consciousness of a literary-historical model that almost entirely ignores them. Gertrude Stein may or may not have met Langston Hughes, as the book’s preface notes (recall Hughes’ audacious political reading of Stein’s statements in the context of US race prejudice and imperial practice, written in 1949), but Tom Postell saw her on the Down Town El to New York City (in the first edition of Yugen) and Harryette Mullen trimmed her into the shape-shifting free-play constraints of her prose-poetic frames. Langston Hughes gets name-checked a number of times across these poems, though he doesn’t sound very much like anything you’d hear here; Hill’s delight in puns is, however, very much in the vein of Julie Ezelle Patton or Russell Atkins or Julia Fields or Elouise Loftin or Lloyd Addison, and their practice of what Patton dubs “phonemenology”.

In Hill’s case, this approach means that within the space of a single line you might find—to pick an example at random—Marie Curie and Nat Turner jostling for space, as the poem seems to construct a discourse on racialised divide-and-conquer strategies of artworld curation: “Lets rate hate hate hate curate hate hate hate / madam Curie mate Nat Turner hate hate hate curate”. (The next lines spin through Shakespeare, St Francis of Assisi and (possibly) Louis Armstrong-style scat and the 1938, Sabu-starring imperialist vehicle The Drum: keeping up with the trains of association enough to construct a summary would be a fool’s errand.) Let’s say that these poems are something like Coltrane’s sheets of sound, perhaps (exploring every single permutation, every harmonic implication of a particular phrasal or chordal structure, both directions at once), or the pleasure of recognition and defamiliarisation in hip-hop’s multiple samples, a plunderphonic spree in curlicued rhapsodic stutter (the kind of stutter that’s the subject of a poem that muses on the mooring and unmooring, the tethering and untethering of ‘poem’ to ‘meaning’). This process can be both exhilarating and vertiginously risky: the fast breath of ecstasy a split second from the asphyxiating hyper-ventilations of anxiety attack.

The book’s preface suggests as another frame of reference scrolling or rolling news and all the contemporary old/new catastrophes that implies—that out-of-time contemporaneity that time operates in the news’ cycles of the catastrophically unstoppable ever-same — “oh wait it’s 2016”. But there’s material heft, grit, graft, that knottily resists digital simulacra even as it engages with/in its frames: the wastage and resistance of the material that, even in rotting, serves as remainder and reminder of histories those news narratives would rather forget— imprisonment, death, racialised violence and patriarchal power. “Wrongful imprisonment can you hear me up / In damn Antarctica touching freedoms”, begins a poem in which the figures of chairs, walls and livelihoods take place within claustrophobic sculptures that run from the plight of miserable children to the general condition of carceral capitalism, where “nails run / down jailers’ wall’d victory”. But this is also—as a necessity of survival—the realm of those inventive responses that circumvent the given frame. The poem ends on a combination of bitter irony and tentative affirmation:

[…] Slip up on a Motown riffty kinda day yes will win

Stay sporadic & still be gay prayful as we sit

In such conditions, there’s no such thing as originality—language as virus or Martian, as the colonial language of the enemy, the linguistic cleansing of class-based grammatical control, a condition of being ‘seized’, from the hold to the cell, the ship to the tower-block, that (re)collects with precious little tranquillity.

Think about jest or originality do you know a mess

What will the will to do do

will the me in me seizure plate.

Collection plates, collected poems, the unchanging will to change, these phrases haunt these lines that are jokes or gestures or death’s jest-book. Yet more often than not—as in that “Motown riffty kinda day”, the poems manage to inhabit a resonant space of conviviality accessed above all through music. Jazz in particular forms an aural soundscape in which the poems can breathe, as Ben Webster free associates into Illinois Jacquet; Jean-Michel Basquiat, famed for painting to bebop, pays a cameo visit; Mal Waldron suddenly turns up in the middle of a seafood cookbook recipe; Billie Holiday’s arm directs an orchestra, suddenly clarifying in a single gesture some particularly bewildering preceding lines, like a couplet’s open closure. This is not musical poetry because it references or describes music; rather it is, in a way, music in itself. Driven insistently, even obsessively by sound, syllables tumbling after each other in a vowel-driven string of association.

Hill also delights in visual puns—seemingly misplaced apostrophes that radically call into question the English language’s orientation towards property/possession; the use of numerical abbreviations (‘2’, ‘4’) from the early days of SMS messaging turning into numbered lists, or parodies of lists, ways of enumerating relation that form a non-totalising total, a fractiously equalised sum. It would be lazy to read any of the poems as manifesti, as analogous to art practice—this book is notable precisely for not fitting that traditional model of the artist who dabbles in poetry as a kind of testing ground for ideas more fully realised in their art. Rather, the practice of making visual art exists alongside, say, listening to music, going on dates, or cooking seafood. Such practice is most obviously present in the collection’s penultimate, and longest text, a prose poem in 4 sections called ‘Not to Worry’. “Representational painting isn’t much my thing (except the window / thang slidin’) not showing”, writes Hill, suggesting the need to avoid too easy a mimetic switch or slip in the way we think about art: “mix the paint tip the brush standing in for vibes”. In the third section of the poem, Hill asks “Why not write about the inside of creation”. For someone who works with externals, the visual, in another medium (language) that supposedly acts as conduit between interior and exterior, Hill would prefer to wobble that tightrope in delirious pleasure, operating on paradox, wit, and nerve: “Completes compositional destructively / Uncivilly proportionally”. There’s power in play, in pleasure reclamation and yet a reckoning with “forgetting’s bloodletting”: such “bodacious intelligence” may approach the infantile (“dirt do doodles shit’s”; “this is an unryhmed poem an anecdotal / Hammertime individual a winning poo poo reaction”) but it’s a serious embodiment of thought and thought of embodiment that provides material to pore over for days, struck each time by the stringent delirium of invention, laughing out loud at the audacity of a string of puns like a string of pearls sliding all over the floor.

The book's back cover to the book presents us with an (invented) dictionary definition which explains its odd title. “Muss sill” is said to be “the underlying brown mess small flowers make having been left too long without adding fresh water or rotating in any porous receptacle; the window sill dust over time when left wanting”. Flip to the legit dictionary and muss is a 19th century variant on ‘mess’, a state of disorder, or more often a verb of messing something up, generally with affection—mussing (up) someone’s hair, say. A window (“the window / thang slidin”), opening and closing; the sill an edge on top of an edge, a link between exterior and interior, “the inside of creation”, where “want” and mess, decay and rot nonetheless create possibility, fertilisation, flowers from the shit. At the end of the long prose poem, the poet catches themselves burning food, having left the flowers to rot, and it feels glorious:

After-all I left corn on grill under candles muss sill