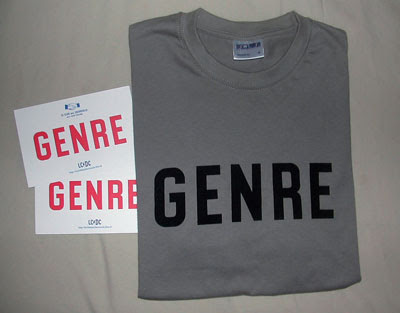 [Note - I'm using the term 'genre' here as a means of defining a certain restriction/ unspoken delineation of what is and is not 'permitted' in works of art. I'm not arguing for the radical overhaul/overthrow of genre itself - working within a set of established conventions/ways of making meaning, and then transcending/ modifying them, perhaps to establish another set of meanings (etc) is a means of engaging with historical & cultural imperatives beyond the individual's imperfect tunnel-vision. Nonetheless, as in the essay which sparked these thoughts, I wanted to mount an attack on/ conduct a sceptical consideration of how artists might relate to genre at present - hence, I did not wish to adopt a reverent tone. In any case, what follows is not 'the finished article', but off-the-cuff/ a provocation/ provisional/ a thinking through. I should also note that this piece of writing, for me, is coloured by various things I've been thinking about in relation to musical free improvisation, & to questions of performance/theatre. It might do to bear this in mind, to realize that the piece is primarily concerned with fairly specific areas of contemporary practice, & probably does not apply very well to, say, the nineteenth century novel.]

A: Excerpts from 'Genre's for Fascists' by Sarah Fox - Blogpost at http://www.montevidayo.com

[...]
Norman O. Brown famously concludes Love’s Body: “Everything is metaphor; there is only poetry.

[...]
Poetic does seem a lot more accommodating than prosaic, or dramatic, or fictive, or _______. Poetry is elastic, not even remotely confined to literature. Because just about anything can be poetic: a tree’s shape, the texture of a placenta, quantum physics, justice, monsters, dreams, death. Might we entertain the proposition that poetry transcends genre and/or engulfs it? (Baudrillard: “theory could even be poetry.”) Is there, on the one hand, poetry-as-genre, and on the other a more Orphic, or gnostic, or even primordial poetic function originating in Cro-Magnon’s first metaphoric projections on cave walls—”oceanic feeling,” e.g.—that is, terminologically, a kind of universal principle?

[...]
Genre is a product and problem of patriarchal economy. Genre = the DNA of the book, its certain paternity, distinction, the disavowal of chaos, “the author.” It’s where the money is (or isn’t). The vessel for both genre and authorship is the book. Which, among other things, is, in a very important sense, a “waste product.” The jouissance and potential “insignificance” for one traveling in the rectal cauldron meet a grave with a trapdoor—just a “little death,” and afterward no toxic trace on the planet (a planet tumored and asphyxiating from all our death drive hyper-reproductivity.) The book—embalmed by genre and the petrified death cries of the forest, metonymous for (reproducing) the person of the author herself—is a burial vault.

So when Joyelle asks us to think about what it really means to go genreless, to essentially speculate about the future of our enterprise, I find myself pondering questions like these: If forced to describe “what you write” without naming genre or any terminology related to the notion of genre, how would you do it? Is genre democratic? Manipulative? Are the constraints of genre part of your process? Are you addicted to genre? In what ways is your identity, your image, significant to the readers of your work? How come nobody but us gives a shit about our genre? Is permanence, and/or “legacy,” crucial to your creative investments? Do you know who you are without genre? Can there be books, or even authors, in a genreless culture?

Paradigm is our enemy. Everything is malleable. There’s only poetry."

Spurred by the piece from which i've quoted at length above, i've been wondering how far the consideration of genre is the condition of possibility for much 'critical' thought about art – does placing artists within a community (real or constructed, canon-formation style, by critics, after the fact) becomes placing them in pigeon-holes, in boxes? The title i’ve chosen is maybe a stupid flippant pun – but in a real sense i think genre does do violence to the work of art, bending/ twisting/ distorting/ modifying it to fit some pre-conceived pattern, shaving off the edges so it will fit neatly & nicely within the designated area in which it is allowed to exist…

Yes it *is* important to consider *community* & the social context of the art in question- where how why it was produced - but doing this thru the trope of genre ends up being always so fucking taxonomic - the 'post-punk shoegaze free-bop avant-nu-metal-speed-thrash-core of the artist's style'... - the work never considered except in constant rel(eg)ation to what has gone before & is judged as the starting point, the eternal point of comparison, the gold standard. We're constantly referred back to a few cultural 'signposts', 'great works', 'top albums' fixed in aspic, often ignoring where they came from (see rock & roll and the white commodification of black music) or that they occurred in the flux and flow and warp and wave of a *continuing* culture (continuing, not necessarily via a process of 'development', but nonetheless thru reciprocal hauntings sharings borrowings etc)). These 'great works' are then judged as the 'starting point' for all future consideration (sometimes the critic tries to predict that the album (or book, or painting, or whatever) will become established as a future 'great work' - actively trying to 'assist' in the process of canon formation). Such reliance on/obsession with 'great works' takes place, it seems to me, mainly because critics cannot be bothered to actually talk about the work itself and its particular aesthetic/sensuous/intellectual qualities - cannot allow the pleasure it might give them (or cannot separate that from the spectacle/economic machine that attempts to shape and subsume it) – must always filter it through canons and genres and critical categories. (Not that 'art' should not be *critical* in a very real sense - but ‘critical’ as connoting a kind of active engagement and passionate concern with the world and the circumstances in which 'we' find ourselves & how we change them and work with and in them and (work our way) out of them - *not* ‘critical’ as connoting the formation of taxonomic categorical cross-referencing genre canons (which always purposely exclude the 'undesirable'/unsayable/unwanted/threatening - or include them only to neutralize them, mute them, strip them of their screaming core))…

This all conditions what is ‘allowed’ or not - what is permissible - 'extreme' things/actions/ways of being are in the end restrained because they too are placed within certain generic contexts - e.g. 'performance art', 'noise music', 'electro-acoustic free improvisation'. & the same with the constant live documentation of every gig/ performance/ reading/ happening on youtube or bootleg mp3s circulating the internet - everything is processed and squeezed through the electronic wires/ circuits/ thru the machine (which replaces/stands in for/merges with the body?). There is no single, important, *present* live act(ion) - everything is connected/ globalised/ simultaneous/ disposable.

& even in live action, when we are in the room performing or watching others (usually men, displaying all the macho qualities of 'radical' political sympathies/imagery (poster boys Che Guevara, Peter Brotzmann, Jesus Christ with their beards / Malcolm X with his machine gun ('By Any Means Necessary')/ Archie Shepp with his saxophone) - even then, even when we convince ourselves that this is the necessary 'underground', the 'resistance', the space which might allow some glimpse of utopia (tho' probably we don't think that slinking down the stairs to buy another pint of beer at the bar), we are held in check. But just what are we afraid of? Of offending people? Offending social norms? But does anyone every really think why those norms are in place to begin with anyway? Is there some sense of guilt in making art? That it must be done 'the right way', the established way (with reference to some previous canonical hero/ martyr), otherwise we're not taking it seriously? Is anyone really worried about failure? Doesn't failure provide the conditions of possibility for new forms, glimpses of possibilities/ utopias/ visions flecked thru dreams ravings starkness? Which only exist as the tiniest flashes in our own body circuits? Which exist only because they cannot be constrained / because they spurt out almost accidentally, tho' willed / like breath or howling

What then is (in) this flash, this glimpse, these flashes & glimpses - what is *not* genre? What is not marketed/marketable - what is itself only itself in that moment nothing else other than itself there present at that one place at that one time in that one room or one place with that one person or that particular combination of persons occupying that space - what is *singular*, irreducible - singular in being itself & no other (& not pretending (simu/lation, di/lution)), yet *plural* too in its sharing/ confrontation/ occupation of multiple possibilities/ impossibilities. I guess this is a way of asking, or answering the question sarah fox poses: “Do you know how you are without your genre?” Do you know how (who/why) you are – without that protection, stripping it away. Which is also the point mattin makes in his essay, ‘going fragile’:

“This is an unreliable moment, to which no stable definition can be applied. It is subject to all the particularities brought to this moment. The more sensitive you are to them, the more you can work with (or against) them. You are breaking away from previous restrictions that you have become attached to, creating a unique social space, a space that cannot be transported elsewhere. Now you are building different forms of collaboration, scrapping previous modes of generating relations.”