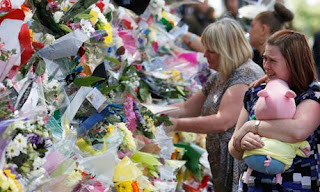 [A PICTURE OF THE KILLER]

A cluster of three or so words forms itself as an ear-worm in conjunction with speculative rolling coverage, on a quiet news day, of yesterday's 'TERROR IN WOOLWICH', the public murder, in Woolwich, South-East London, of an off-duty soldier wearing a 'Help for Heroes' T-shirt by two men filmed with the machetes and kitchen knives they had used to commit the attack and with blood on their hands, the men justifying this action verbally, in this fully visible video coverage, as an act of revenge for those acts of bombing and killing of civilians carried out by the British army and their collaborators, acts for which the soldier, as that army's specific representative at that conveniently accessible moment, was taken by his murderers to be directly or indirectly responsible. The cluster of words heard in the coverage exerts a kind of suggestive force which correlates to the specific meaning of the word 'magic' or 'spells', or poetry, the poetry of the news media which is equivalent to the poetry of advertizing, the ability to enact a particular mental attitude through a kind of suggestion which has not quite burrowed down to the level of the subliminal but is still sly enough to resist an immediate or obviously accessible recognition of the particular power thus exerted.

For example, the term 'radical' becomes associated with the terms 'Islam' and 'terrorism', thus conflating 'Islam' with 'radical', 'radical' with 'terrorism', and 'terrorism' back with 'Islam', in a kind of feedback loop, or, more fancifully, an inescapably circular Ouroboros-structure. Develop your own metaphor as you will. It also becomes associated with murder in general, so that to be 'radical' is taken to be an implicitly terroristic stance. This is a means of normalizing reaction and manufacturing assent or consent for a particular normative narrative in which the heroes and villains are clearly delineated, and your own position in relation to them must also be clear: for or against, a murderer or one who condemns murder, some sicko getting visceral thrills off an objectively evil action or the beautifully tender Cub Scout leader who attempted to protect the mutilated body of the soldier in the street after he was dead. To say that there is a truth to the murderers' public assertion, that the murdered soldier did tacitly or actively participate in the killing of "Muslim people in Muslim countries[...]all the bombs dropping and blindly killing women, children," is thus to be radical and to be a murderer, even if one is not a Muslim or an 'Islamist' per se, merely their misguided or actively malicious apologist.

This absolute condemnation of violence, this insistence that any justification for this particular act of violence must be inherently and automatically false, does not move the other way: the English Defence League's reaction, in which an individual enters a Woolwich mosque "with a knife and an incendiary device" only makes it to page 8 of the London Evening Standard the following day, and the words 'incendiary device' are placed in inverted commas to suggest a scepticism towards the official report. This scepticism, which implies a potential falsity of the word thus bracketed and enclosed, exists nowhere in the main page reportage of the soldier's murder, with its non-scare-quoted usage, for example, of the adjective "chilling" in relation to the footage of that murder.

Meanwhile, the news-readers' and papers' worry at acts of 'lone wolf terrorism' such as these - see, for example, p.14 of the Standard - fosters a state of complete paranoia in which we all (but most particularly, those of us with non-white skin) are regarded as being potentially recruitable, all potentially 'radical', and thus all potentially murderers; and any deviation from the circumscribed methods and modes of reaction or opinion is thus inherently suspicious. To deviate from these norms is to make oneself a murderer, guilty of thought-crime, your hands covered in mental blood. Indeed, the norm itself is stretched so that what might previously have been regarded as an extreme, as 'radical' in itself, becomes that which all right-thinking, compassionate people who are in solidarity with the victims of murder must do and think. "The most positive response is to show support for the armed services. [...] The victim was wearing a Help for Heroes T-shirt; it should be widely worn. The organisation's website temporarily crashed under the weight of visits; we should donate money to it and to the Royal British Legion." The "compassion" and "solidarity" by which the writer of this opinion piece characterises such actions, which he urges "Londoners" to adopt, thus establishes a group defined in terms, not only of city or of nation, but of a specifically militaristic and militarized nationalistic sentimentality. To love a man in uniform, or in uniform's civilian stand-in, the Help for Heroes T-shirt, is to be against murder, and to suggest that that uniform, that T-shirt, that website or those stickers might themselves to some extent be associated with the murder of those not fortunate enough to be white English men or women, becomes unthinkable and unspeakable. There must be tears in your eyes, even, when you think back to the parades in the recently-renamed 'Royal' Wootton Bassett. These thoughts must be internalized and externalized in a condition of total and unswerving belief.

Further, the use of the term 'terrorism' to describe the attack, which perhaps implies political motivation, rather than, say, a crime of passion or a purely 'random' attack, overlooks the inescapably political dimension of many more crimes that are not given the term 'political', the gender roles or tendencies to misogynistic violence that might lead a man to beat or murder his wife, Danny Dyer's 'joke' that a 'wronged' boyfriend should cut his girlfriend's face. Those who are 'radical' by dint of their opposition to the murder of civilian bombing-victims, the death of the disabled individuals who have had their welfare cut, the death of the homeless, the death of those driven to suicide out of sheer despair - who are against those specific and traceable murders - are thus themselves murderers. In a bizarre reverse process, to oppose murder is to be a murderer. Don't get me wrong, I am not reaching for my machete or for my kitchen knife, though your magic word-cluster, extra-legal but with the power to affect the decisions made by those with legal powers, and thus, with the power of law itself, suggests that I am. This is your poetry, your magic spell, your curse, the hymn-sheet from which we birds must sing, enmeshed in this sung spell you have given us, barbed wire necklace, bands around the throat. Its content is so firmly welded to its form, its affect so deliciously precise, as to make anyone consider writing no more poems. For what could these poems be, except the murderers' kitchen knives, their machetes, their incoherent but intensely concentrated and specific justificatory words on the street after the murder? Against the poetry which stigmatizes opposition to specific forms of sanctioned state and imperial violence with the charge of endorsing and thus participating in non-sanctioned violence, what can my thrill-seeking appeals to a 'legitimate' violence in poetry do but fall into the trap that has been set for them by the news-readers' and reporters' magic spell? Or, as Amiri Baraka puts it, "what will be / the sacred words?"