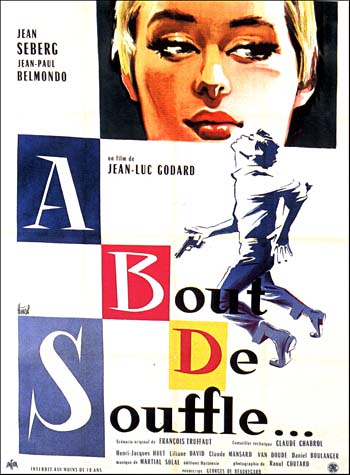 Thought I'd post some tracks from the soundtrack to Godard's 1959 New Wave film, a classic (by reputation and breadth of influence, at least), with iconic performances from Belmondo and Jean Seberg, and a sense of improvisational coolness and casualness that's (pardon my ignorant Britisher generalisation) typically French (though of course Seberg was American, and speaks with a noticeable American accent throughout the film). The music, by jazz pianist Martial Solal, has a laidback vibe that perfectly suits the aimless, amoral progress of Belmondo's characer through the film, at times turning up the heat for some (deliberately over the top) moments of melodrama ("La Mort"). Solal gets up in some brief but tasty piano solos on "Duo" and "Historie du Cirque," alongside a fairly large jazz band (no idea who the players are, but they acquit themselves well within the fairly limited confines of what they're being asked to do). The main theme, which reccurs throughout the film, is at once mocking and jocular, sinister and jaunty, and is taken through an ingenious set of variations by Solal in these selections, with many shifts in mood and colour. Maybe not one of the great jazz soundtracks (there isn't that much music, for a start - all the CDs on which you can find it combine it with scores for other films), but, still, it's some great 50s 'cool jazz' which perfectly complements the film it was written for.